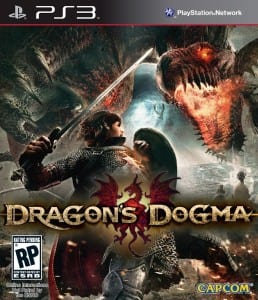 Title: Dragon’s Dogma
Developed By: Capcom
Published By: Capcom
Console: Playstation 3 / XBox360
Genre: Action RPG
Classification (US): The ESRB has classified this game as Mature for Blood/Gore, Partial Nudity, Suggestive Themes and Violence
Classification (AU): This title has been classified as MA15+ for Strong Fantasy Violence
Review Conditions: PAL Region, Playstation 3
Special Thanks: A copy of this game was purchased out of my own pocket.

Driven to seek out the Dragon. They say that the one whose heart is taken by the Dragon is forever changed; their destiny now lies with the Dragon. You have been chosen. And now, you are an Arisen. But everything is not as it seems. The choices you make will determine your fate. Make sure you choose wisely, for the path of least resistance and one requiring more courage might grant you immortality but not true freedom. The vast open world is filled with all sorts of characters you’ll encounter in addition to massive beasts you’ll need to defeat in battle. Capcom’s epic new action adventure is unlike anything you’ve ever seen before!

It has been a little while since I have been writing up game reviews. Having not had the luxury of time to be playing the games – from April to early-June I have only been casually playing them in my breaks while I constructed a 100+ page thesis. This month I have had the pleasure of catching up not only with the newer titles but those that I had missed and over the next couple of weeks alongside reviews of new content will be posting slightly smaller game reviews in my post-thesis game review session. The first game of this set of reviews is a title I ran to the store to buy the day I submitted my final assignment, Dragon’s Dogma developed and published by Capcom and unlike some other games of this genre was very hyped to get a chance to play it. Did it live up to my expectations?

The key to any good game in my opinion is an enjoyable storyline, and out of everything in this game it is rather lacking until much later on into the game. You play as a custom character only referred to as “The Arisen”, who in the early moments of the game finds his village under attack by a Dragon, decides to play the hero and finds himself killed by it. Instead of dying however, the dragon only plucks out his heart mumbling words I could not understand and the hero wakes up much later on with a scar down his chest and more mysteries than answers. Deciding it is his/her quest, he travels around in search of killing the Dragon – all the while doing numerous side quests for the Duke and other members which can go on for a number of hours without much activity.

He or she is also granted the ability to summon three pawns – one they can call their own and another two from other Arisen in other parallel universes. Due to potential differences in appearances that would not go with a single character voice they chose to make not only them silent throughout the game, but the other three pawns silent other then occasional shouts of “There’s a bridge Arisen!” or describing an ambush lying ahead. While I will go into more detail about this later on in the review there is no much activity going on with the four main characters being quiet and very few cutscenes in between long and sometimes tedious missions and MMORPG-esque quests. There are a few moments where the game does shine, occasionally in the beginning and more-so at the end, but it failed to meet the immersible experiences that other Action-RPG’s have in the past. 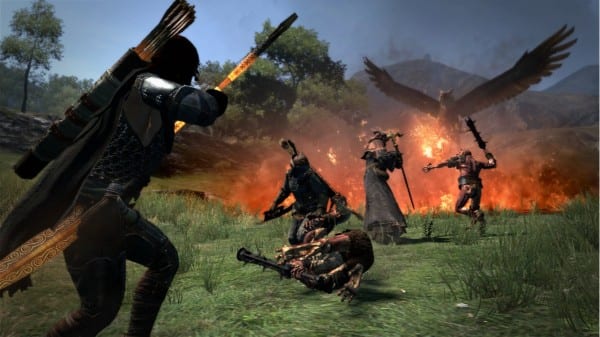 I have been reading very mixed reception regarding to the design of the game, and while it is not a visual masterpiece like some other games recently released on the market I felt they did well enough to contribute to the intended mood and setting of the game. Unfortunately the game does not feature as big a world as Skyrim (Actually in is quite small in comparison), however considering the game makes you travel everywhere by foot they have done a good job at developing it so deviating from the barren track is rewarding with side-routes, additional landmarks and so forth.

Character designs when coupled with the environment do go well hand-in-hand and the character creator does give you a wealth of options when designing them. I would have been open for more options when it came to hairstyles, which were rather sameish, and the tools provided made it difficult to design a truly unique character in my opinion. You are provided with a nice assortment of equipment as you progress through the game, most of which have some visual impact on the character and alongside everything else – suits the theme of the game. What they truly were lacking however was a great assortment of monsters – and quite often in the game I was faced with fighting the same looking harpy’s and goblins – although some of the bigger enemies really were visually impressive and were enjoyable to battle with.

Aside from the designs, there was the occasional animation bug and some lighting issues that could have had more attention paid to them but otherwise it was above average quality when it came to the design and visuals. 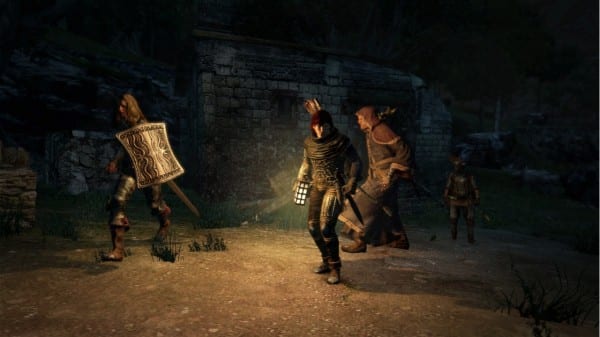 From the main menu screen, the game hits you immediately with a J-ROCK track by the group B’z (An English version of the song Samayoeru Aoi Dangan) and considering I entered expecting a softer song, it was a rather interesting and enjoyable addition to begin the game with. From there, to keep with the realism of the world the game does not feature a prominent music track although what is provided is suitable enough for the game. Your main character is silent however the three pawns with you do give very frequent feedback – some of which is useful and most being the same comments involving the word “aught” a lot. These pawns consist of the same set of voices set when you design the characters and are not bad but get very repetitive. While the recording quality could have used improving in some cases, cinematic dialogue provides some well dubbed voices that are well suited to the intended setting of the game. 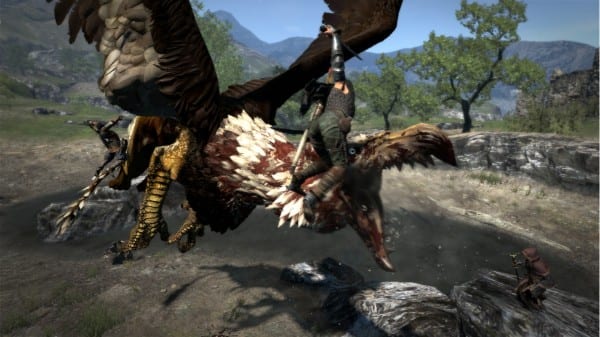 Where the game succeeds is in its gameplay. As mentioned above, you get to create two characters upon starting the game, the first being “The Arisen”, your main character who you take control of during the game and the second being the “Main Pawn”, a character that will join you all though your quest but can also appear in other gamers worlds as a recruitable party member. To make the party of four, you must recruit an additional two pawns from other players around the world – and considering shipments of the game have surpassed 1,000,000 copies there are a lot of pawns on offer. The game does maintain game balance by using a currently known as RC earned from having your pawn visit other worlds or though general exploring. Every pawn above your own level has their price so while it may be tempting to recruit a Level 80 character for your party and breeze through the game, you are allowed only a leeway of a few levels without their RC price being too high. These pawns of course will need to be replaced regularily so it encourages you to expand and diversity your strategies as you progress through the game.

There is also some degree of strategy with choosing party members as they are limited by the weapons, skills, equipment and knowledge they have. The game has nine character vocations, six of which may be added to a pawn and each having different pros and cons when it comes to selecting the optimal party member. For example, only mages have the ability to heal while the advanced “Sorcerer” class earns more powerful magic attack skills and similar differences for each of the three primary classes (Fighter, Strider and Mage) alongside the three hybrid classes. This system coupled with the character creation offers considerable freedom in developing your character but also the freedom to change the classes through the course of the game. But this is not the only thing that makes choosing a pawn correctly, with an emphasis on quest and enemy knowledge that will provide gamers using your pawn with additional hints on quests and enemies you have previously tackled.

These pawns were one of the unique draws to this game and were effectively used to add a bit more diversity to the battle system. They were well programmed in and despite a few little AI issues, most of which involved them all standing around watching my Magick Archer getting mauled by a pack of wolves it was a system I would like to see reused and expanded upon in future games – considering they had a flair for big battles, seeing more pawns used in storyline battles or something along those lines. 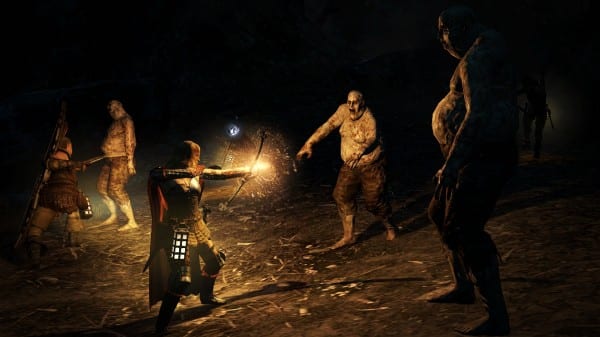 The games battle system is a simple action-RPG affair with a few little tweaks. As with most games, you are left to roam around a free world to reach certain destinations and will quite often come across enemies through plot events and just through normal travelling. You are able to attack with your weapons through either mashing the corresponding button for normal and strong attacks, aim and shoot (Well implemented if I may say) and perform an array of skills or in other words your standard affair for a game like this. While there is nothing too special when dealing with smaller enemies such as goblins or wolves, it doesn’t hurt at all that the game will occasionally throw you a cyclops, griffon or even a band of thieves (or any combination of) at your party which pose much more of a threat and require better strategizing lest you end up being pummeled by arrows and stuck with a Game Over (Which at times led to the loss of a half-hour / hour of gametime). it is simple but it is enjoyable and suited prolonged gameplay.

The game might not win over everyone with its simplistic MMORPG-esque quests and no auto-travel, but the game does provide you with plenty of rather awesome battle moments, just enough potential loot to appeal to both casual and hardcore gamers alike and is overall a game that looks short but provided you don’t purposefully try to rush through the game should provide you enough content and freedom to last a couple of dozen hours at least.

Coupled with a few additional online features, the fact that Capcom have expressed interest in building from this new IP further and several other factors mentioned above, it did take risks and left some room for improvement and perfection but otherwise left its own unique mark on the genre. Dragon’s Dogma has provided me with much enjoyment and provided me with the same sometimes frustrating enjoyment that Demons Souls did…. nothing overally extravagant but gameplay focused and keeps you on your toes.

Final Score
Storyline/Character Development: C-
Design: B
Music/Voice Acting: B
Gameplay: B+
Replayability: B+
Personal Opinion: A-
Overall Score: B+