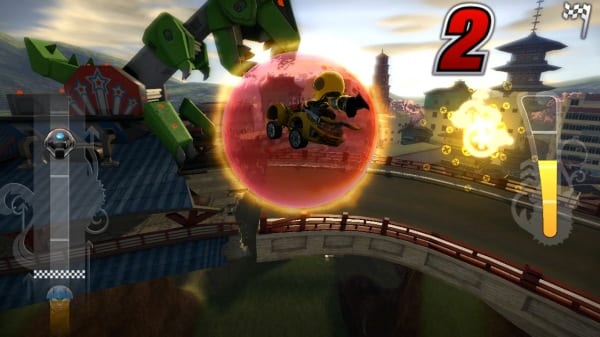 Released in mid-2010 and riding the boom of the LittleBigPlanet’s “Play, Create, Share” was ModNation Racers for the Playstation 3 and later the Playstation Portable. Bringing the core racing-style gameplay with their own tweaks to the formula, it also brought the customization element to the game – allowing players to create their own racers, vehicles and race-tracks through unlockable (Lots of) and downloadable content (A few bits here and there for free or a cost). It was a game I invested lots of time into and enjoyed both single-player and online multiplayer modes immensely. While I skipped the Playstation Portable release I was more than happy to jump into the Playstation Vita release which offered support for all my custom creations from the Playstation 3 release while offering new race-tracks and even more unlockables. While it is still an enjoyable title…. it didn’t live up to my expectations and didn’t do as good a job at integrating certain Playstation Vita controls.

The one thing about this game is that provided you don’t mind the same core gameplay mechanics being used over and over again (For which I will go into more detail shortly), you will often be able to go through the online download lists to find a new track which has been developed and provides a new challenge or multiplayer experience, on-top of several dozen tracks already incorporated into the games Career mode which are equally as challenging as those on the Playstation 3 version. Lets be honest… considering this is a “Karting” style of gameplay which has been around for a very long period of time in games – it is pretty hard to mess up the core gameplay mechanics. The controls have been adapted from the original Playstation 3 release and requires no extra training for someone already familiar with the game to pick it up and race from the get-go, so it is still a drifting oriented racer with some brutal AI at times and a whole array of weapons at your disposal (And Vita-exclusive weapons as well). 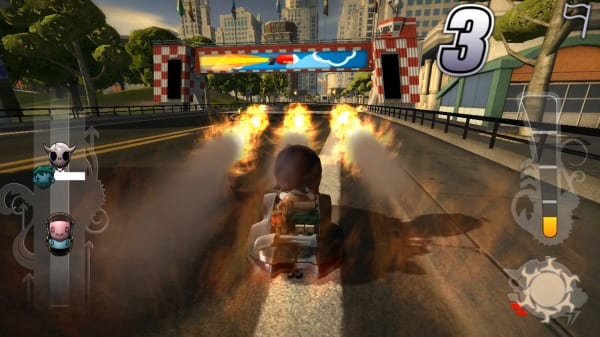 It is ModNation Racers, so if you are after either a solid racing experience and/or the ability to customize said racing experience then this might be up your alley if you don’t have a Playstation 3…. but with the exception of a few racing additions such as the new weapons and tracks…. there is not all that sets this game apart from its predecessors other than portability. This is by no means a bad game, and actually I enjoyed the single player campaign quite well – however do think that the other elements of the game could have used improving on. First off, when ModNation Racers was first released in 2010, the biggest issue I had with the game was the load times which could surpass the 1 minute mark for online battles – while it doesn’t reach that same time period you may find yourself waiting 30 seconds to load a track which I would have liked to have seen cut down. The second issue was the touchscreen support which was at times touchy and fiddly (Especially in the menus) and implementation of this in the track builder didn’t offer nearly the same degree of track design as the manual driving system which features the ability to manually elevate or depress your track slope. Finally….. while the “Share” element of the online mode is present, with the exception of a normal multiplayer mode there is no online functionality – which might not have been practical given the portable console but I would have at least liked to have seen a random lobby system or something along those lines.

While the visuals do seem to leave a different impression and detailing over the Playstation 3 release, I didn’t mind it so much and felt the character visuals complemented the design of the tracks well. There were also a few frame-rate drops in specific maps, however for the most part I noticed no real problems. Music and sound effects are fine and maintain the same sort of themes as the original PS3 release…. however I really do miss the presence of Gary and Biff in the cutscenes, and the other crew members of Tag’s team…. they could have thrown some plot or humor into this game!

Final Score
Storyline/Character Development: N/A
Design: B
Music/Voice Acting: B
Gameplay: B-
Replayability: A-
Personal Opinion: B
Overall Score: B