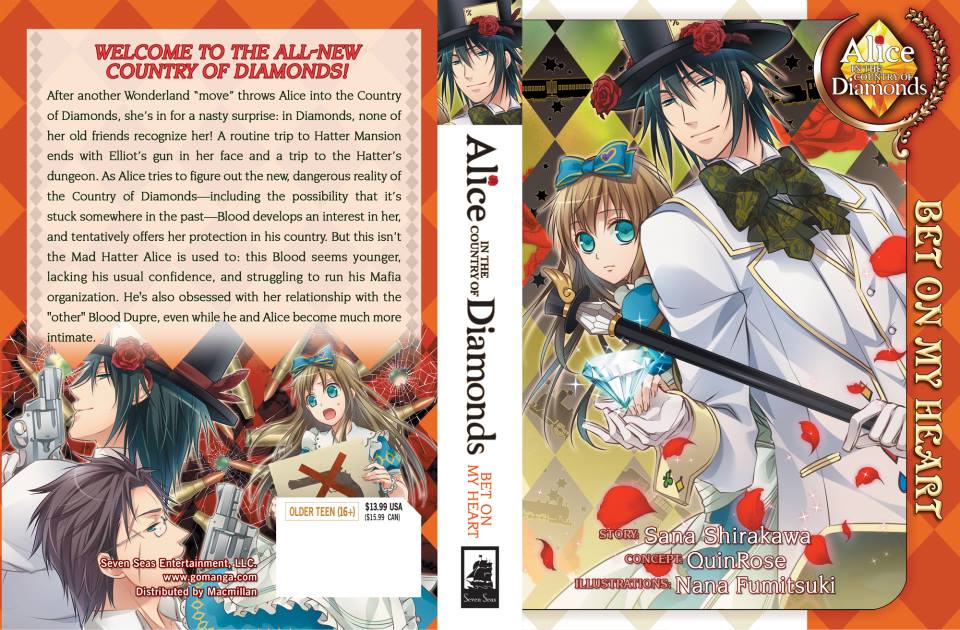 WELCOME TO THE ALL-NEW COUNTRY OF DIAMONDS

After another Wonderland “move” throws Alice into the Country of Diamonds, she’s in for a nasty surprise: in Diamonds, none of her old friends recognize her! A routine trip to the Hatter Mansion ends with Elliot’s gun in her face and a trip to the Hatter’s dungeon. As Alice tries to figure out the new, dangerous reality of the Country of Diamonds—including the possibility that it’s stuck somewhere in the past—Blood develops an interest in her, and tentatively offers her protection in his country. But this isn’t the Mad Hatter Alice is used to: this Blood seems younger, lacking his usual confidence, and struggling to run his Mafia organization. He’s also obsessed with her relationship with the “other” Blood Dupre, even while he and Alice become much more intimate. 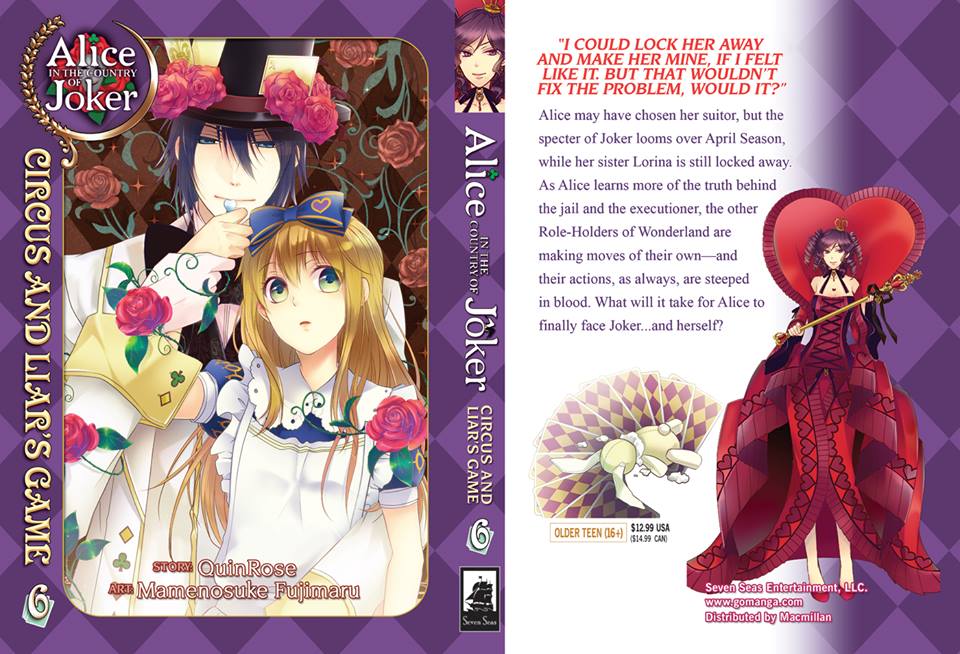 “I COULD LOCK HER AWAY AND MAKE HER MINE, IF I FELT LIKE IT. BUT THAT WOULDN’T FIX THE PROBLEM, WOULD IT?”

Alice may have chosen her suitor, but the specter of Joker looms over April Season, while her sister Lorina is still locked away. As Alice learns more of the truth behind the jail and the executioner, the other Role-Holders of Wonderland are making moves of their own—and their actions, as always are steeped in blood. What will it take for Alice to finally face Joker…and herself? 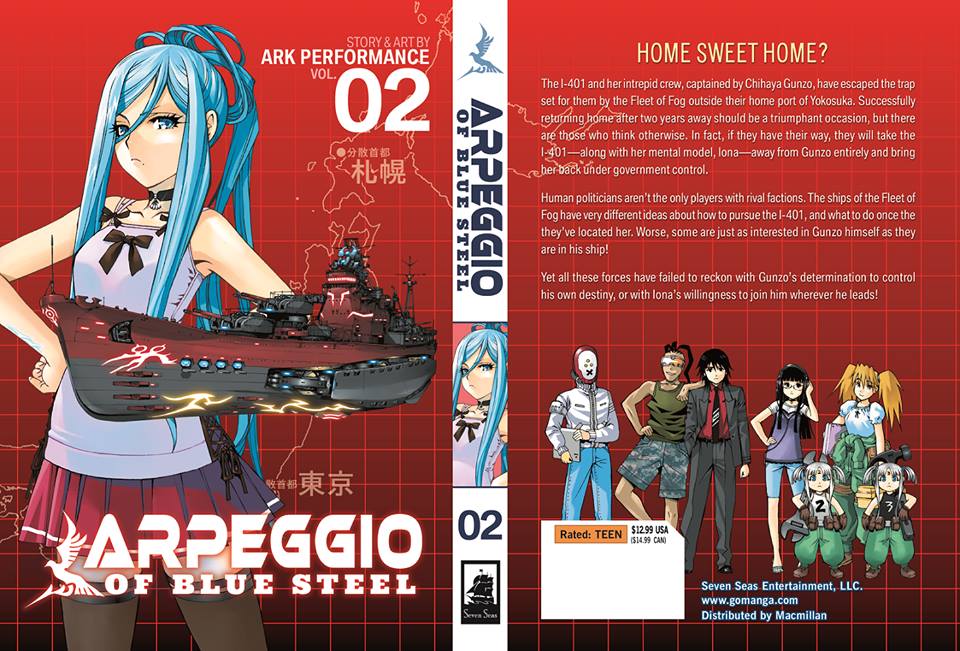 The I-401 and her intrepid crew, captained by Chihaya Gunzo, have escaped the trap set for them by the Fleet of Fog outside their home port of Yokosuka. Successfully returning home after two years away should be a triumphant occasion, but there are those who think otherwise. In fact, if they have their way, they will take the I-401—along with her mental model, Iona—away from Gunzo entirely and bring her back under government control.

Human politicians aren’t the only players with rival factions. The ships of the Fleet of Fog have very different ideas about how to pursue the I-401, and what to do once they’ve located her. Worse, some are just as interested in Gunzo himself as they are in his ship!

Yet all these forces have failed to reckon with Gunzo’s determination to control his own destiny, or with Iona’s willingness to join him wherever he leads! 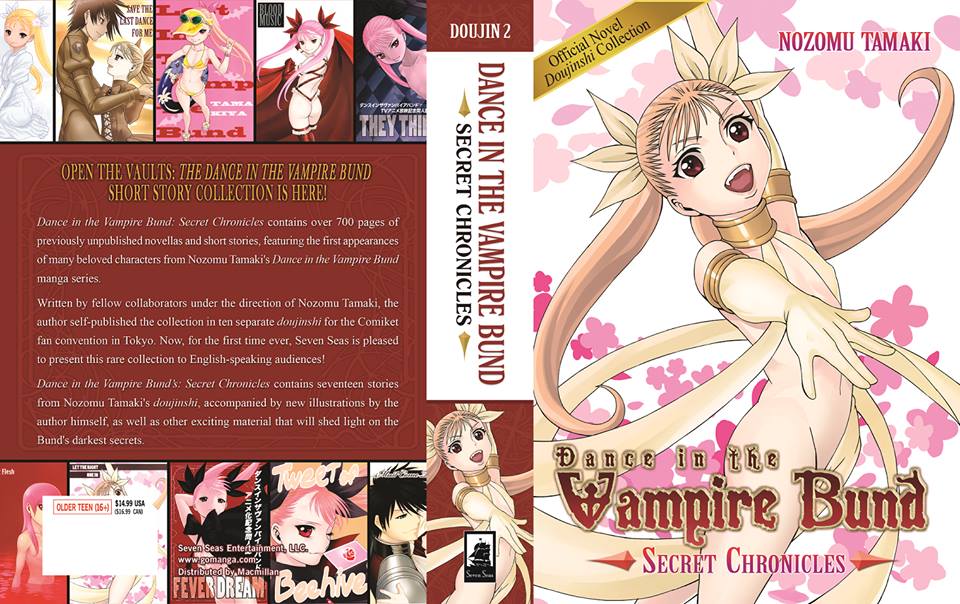 OPEN THE VAULTS: THE DANCE IN THE VAMPIRE BUND SHORT STORY COLLECTION IS HERE!

Written by fellow collaborators under the direction of Nozomu Tamaki, the author self-published the collection in ten separate doujinshi for the Comiket fan convention in Tokyo. Now, for the first time ever, Seven Seas is pleased to present this rare collection to the English-speaking audiences!

Dance in the Vampire Bund’s: Secret Chronicles contains seventeen stories from Nozomu Tamaki’s doujinshi, accompanied by new illustrations by the author himself, as well as other exciting material that will shed light on the Bund’s darkest secrets. 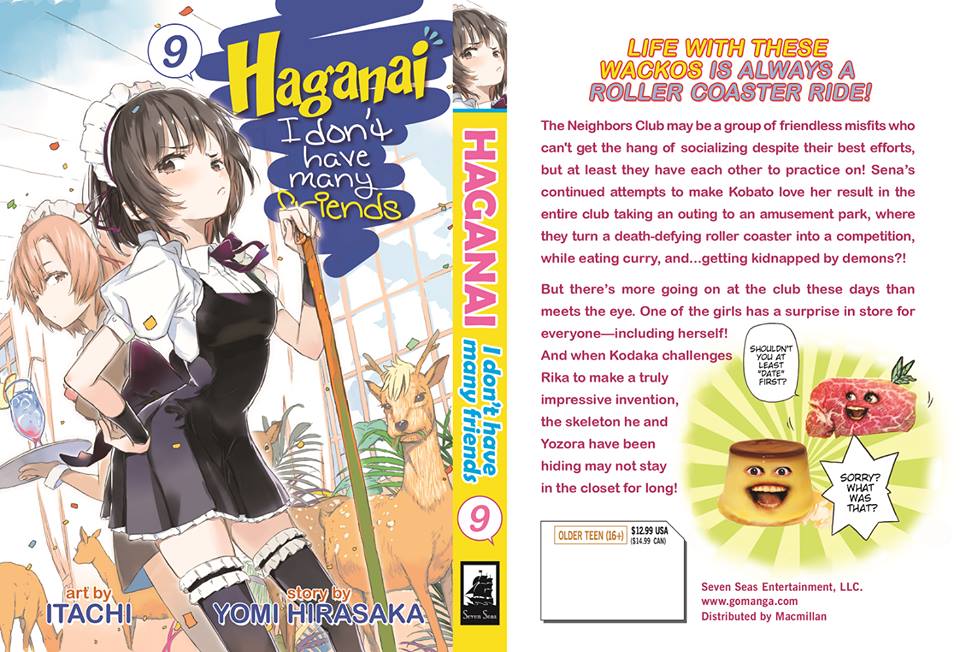 LIFE WITH THESE WACKOS IS ALWAYS A ROLLER COASTER RIDE!

The Neighbors Club may be a group of friendless misfits who can’t get the hang of socializing despite their best efforts, but at least they have each other to practice on! Sena’s continued attempts to make Kobato love her result in the entire club taking an outing to an amusement park, where they turn a death-defying roller coaster into a competition, while eating curry, and…getting kidnapped by demons?!

But there’s more going on at the club these days than meets the eye. One of the girls has a surprise in store for everyone—including herself! And when Kodaka challenges Rika to make a truly impressive invention, the skeleton he and Yozora have been hiding may not stay in the closet for long! 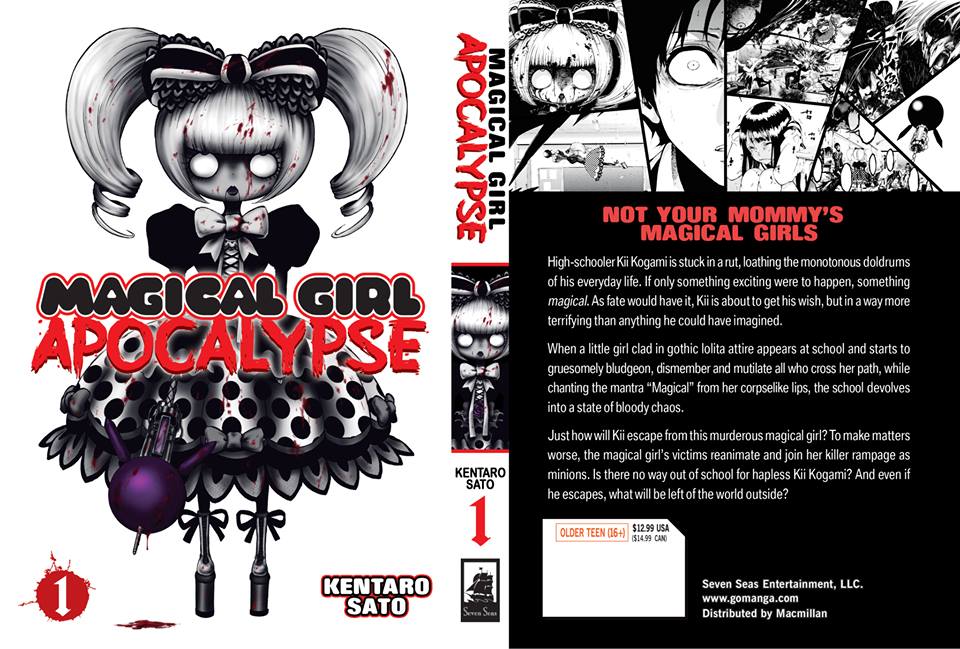 NOT YOUR MOMMY’S MAGICAL GIRLS

High-schooler Kii Kogami is stuck in a rut, loathing the monotonous doldrums of his everyday life. If only something exciting were to happen, something magical. As fate would have it, Kii is about to get his wish, but in a way more terrifying than anything he could have imagined.

When a little girl clad in gothic lolita attire appears at school and starts to gruesomely bludgeon, dismember and mutilate all who cross her path, while chanting the mantra “Magical” from her corpselike lips, the school devolves into a state of bloody chaos.

Just how will Kii escape from this murderous magical girl? To make matters worse, the magical girl’s victims reanimate and join her killer rampage as minions. Is there no way out of school for hapless Kii Kogami? And even if he escapes, what will be left of the world outside? 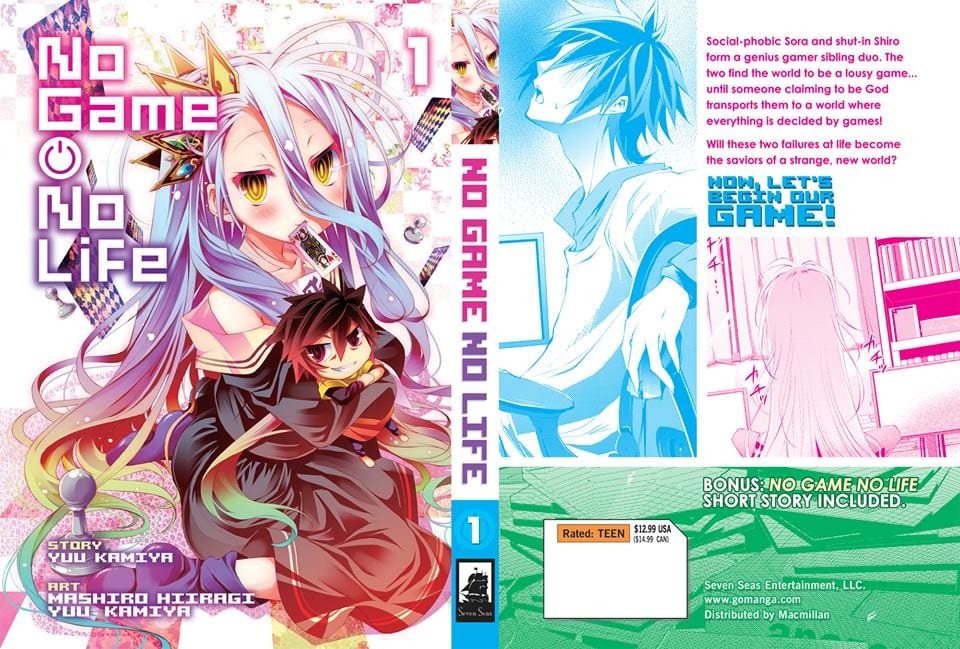 Social-phobic Sora and shut-in Shiro form a genius gamer sibling duo. The two find the world to be a lousy game…until someone claiming to be God transports them to a world where everything is decided by games!

Will these two failures at life become the saviors of a strange, new world? 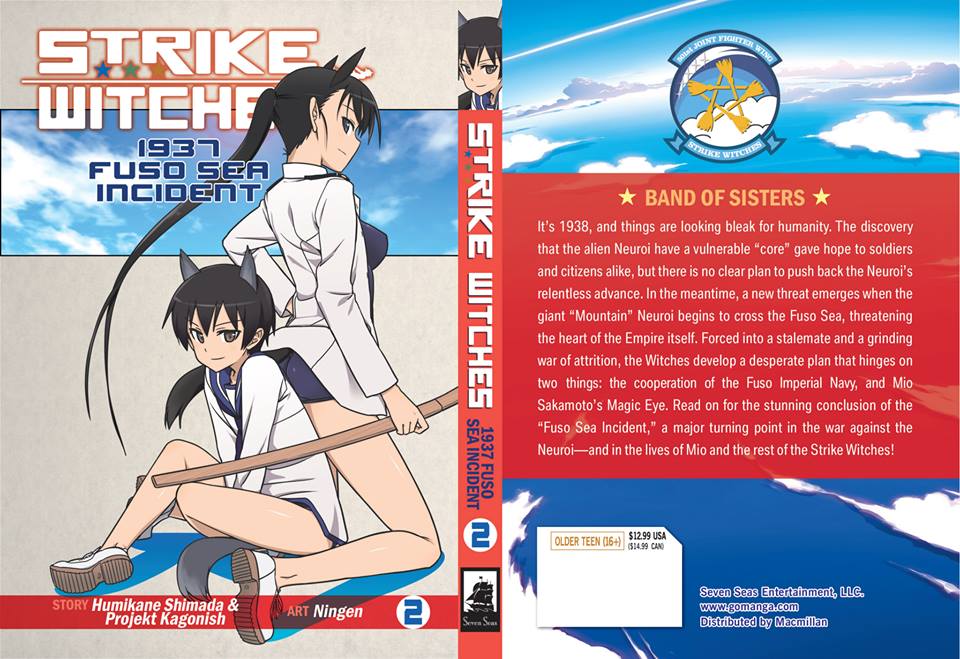 It’s 1938, and things are looking bleak for humanity. The discovery that the alien Neuroi have a vulnerable “core” gave hope to soldiers and citizens alike, but there is no clear plan to push back the Neuroi’s relentless advance. In the meantime, a new threat emerges when the giant “Mountain” Neuroi begins to cross the Fuso Sea, threatening the heart of the Empire itself. Forced into a stalemate and a grinding war of attrition, the Witches develop a desperate pan that hinges on two things: the cooperation of the Fuso Imperial Navy, and Mio Sakamoto’s Magic Eye. Read on for the stunning conclusion of the “Fuso Sea Incident,” a major turning point in the war against the Neuroi—and in the lives of Mio and the rest of the Strike Witches!

US-based manga and light novel publisher Yen Press has this week confirmed that their anticipated release of...
Read more
Artbooks