It was two months ago. I had just entered the fourth grade
I came upon an old book in my dad’s library
and from the moment I opened that book
my days as a Clow Card Collector began….. 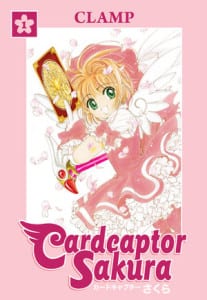 Originally released as individual volumes by Tokyopop, Dark Horse Manga has since taken over the reins of the manga rights and been releasing the manga series as Omnibus releases. While there is something enjoyable about collecting individual volumes of manga, the decision of late for some manga companies to release several volumes in a single omnibus’ provides (In my opinion) an incentive for fans to purchase and continue enjoying the series – after all you get better value for money most of the time, you get a nice weightier book and most importantly you don’t have to wait for months on end for another couple of hundred pages. Coming in a 576 pages with extra artwork and a price of $19.99 USD… I wouldn’t go saying that the first three manga volumes  of this series is bad value.

This review has come about in celebration of Madman Entertainment’s impending and well overdue release of the Cardcaptor Sakura series, completely uncut and essentially the series how it is supposed to be watch. While I have been active in promoting such a title, I have not actually watched more than one or two episodes of either English or Japanese dubbed releases with it being scheduled for air at an inopertune time on television when I was younger (As well as being at that funny age where most kids stray away from anything childish… only to come back when they are in their late teens with a new appreciation for them – have you seen how popular Sesame Street skits have been to my generation?) so this also served as a welcoming point to my viewing.

The storyline follows Sakura Kinomoto who after finding a mysterious book in her fathers library, manages to set free an ancient set of cards produced by the wizard Clow – setting loose some friendly but mostly dangerous spirits out into her town and surrounding areas. The guardian spirit of the book “Kero” wakes up to find all the cards gone and the young fourth grade girl who despite seeming average at first – has actually managed to break a magical seal. The two of them set forth on a journey to capture all the cards and attempt to stop their havoc on the town – from taking control of one of Sakura’s friends and have her expertly wield a sword – to burying the entire town in flowers.

Each chapter generally follows a generic plotline of “Introduction” –> Discovery of a Potential Card –> Planning –> Capture –> Repeat in a very “Card of the Chapter” manner. For this series it works given that most of the characters are grade-school age and they have given themselves some freedom with the different card types and backstory which never keeps the storyline dragging along. The storyline also includes a number of main, secondary and minor characters which contribute to relevant plots.

These include Sakura’s best friend Tomoyo who serves as non-magical sidekick, film recorder and cosplay provider with initial hints of some crush on Sakura, Toya who is Sakura’s older brother who has the ability to see spirits and Toya’s best friend Yukito who does not receive much in terms of development in this chapter. Later in the omnibus, Sakura forms a rivalry with fellow student Syaoran Li, a transfer student from Hong Kong and distant relative to Clow. While I am aware he serves the role as a main character in later volumes, in these three he weaves more in and out of the plot.

The storyline works on a chapter by chapter basis, with some being more enjoyable than others… but it carries the charm of other CLAMP manga and anime series. There is no recommended age group for this volume on its cover, however I think it is an all-ages friendly series personally. There might be some subtle hints and storylines which may be more appreciated by more mature-age readers but otherwise the manga’s cutesy artwork and simple but enjoyable storylines should appeal to most fans of shoujo / magical girl manga. 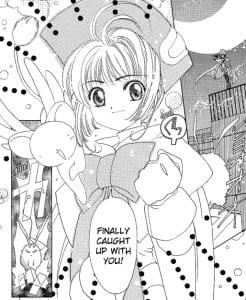 When you think of a CLAMP manga series, you expect good attention to detail and cute character designs – both of which this first omnibus at least has achieved. Given the fact that every chapter Sakura (and often Kero) wear different attire when capturing Clow Cards, that there shows they they have not slacked off when designing the characters (and not left every character with a wardrobe filled with the same outfit like some manga series) and manages to keep the aesthetic which helps keep the series all-age friendly. Environment designs do occasionally succumb to being nothing but white backgrounds, despite this most of the time they do use visual effects to showcase some action and magic used in clow card battles and what environment designs they do use complement the character designs well.

With this release, Dark Horse Manga have promoted that they have made use of remastered image files straight from CLAMP, and in terms of printing quality I have no qualms with them. They have also included twenty-five bonus colour illustrations throughout the book which were a nice addition.

With the exception of the above mentioned colour illustrations, the only other items which could be considered as extra content are:

I originally purchased this book for myself a few minutes after I submitted my thesis for printing and binding as a “Hurrah for Completion!” gift to myself and had high expectations to provide an interesting read. Fortunately, these expectations were met and the book proved to be highly enjoyable. It has made me all the more excited to getting my hands on the other three volumes AND of course reviewing the anime series this September.