The Otaku’s Manga Study #1a 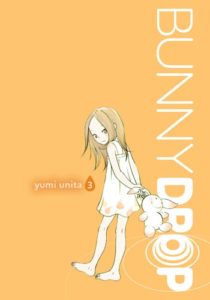 As an impromptu dad to Rin, his late grandfather’s illegitimate child, Daikichi Kawachi has experienced his share of firsts while caring for his little aunt (?). Now it’s Daikichi’s turn to battle the initial wave of separation anxiety as Rin leaves the nest…for her first day of elementary school! Rin’s elementary school isn’t the only place with new faces, either. Daikichi’s office is also inundated with first-timers, some of whom have their eyes on their gangly new coworker! And while father and daughter are experiencing (coping with?) all these firsts left and right, the first anniversary of Gramps’s death also sneaks up on the pair… as does the first anniversary of their paths crossing…

It was hard not to begin The Otaku’s Manga Study without reviewing the next volume in a series that I have always had a high regard for, especially considering the anime release of the series (Titled: Usagi Drop) is due for release in Australia next month. As it has been a little less than a year since my last review I would like to take the moment to quickly recap the series. Daikichi, a thirty year old working class man attends his late grandfather’s funeral only to find a mystery girl standing in the foyer – this girl is Rin, the illegitimate child of his grandfather and a mystery woman. After discussions about his future are put on the table, none of which would benefit Rin in the long-term, Daikichi decides to take it upon himself to become the father-model in her life. This is a series that is about Daikichi and how he adapts his lifestyle while trying to help Rin enjoy her youth. The first volume was about getting Rin sorted into her new lifestyle and helping her come out of the shell while the second volume was Daikichi’s search for her mother among other things. This third volume… well read on further to find out.

Unlike the previous two volumes that had a bit more focus on what they intended to get across, the third volume is a sort of mix of storylines with Rin finishing off kindergarten and moving onto elementary school which brings more troubles to Daikichi which are also coupled with family traditions, the unwavering decisions of Rin’s mother and complications arising in the workplace. While the plot still focuses heavily on Daikichi, they also chose to give Rin just a bit more attention as she begins forming a closer bond with those in her primary school – especially with Kouki who she went to kindergarten with, with evident hints of a friendly one-sided crush.

If you were to read the three volumes of the manga so far in one go, you will see the subtle changes in her personality and interactivity with others from her old shy and somber mood at the funeral. While I enjoy the aunt-nephew relationship of the two main characters, the office environment that is mentioned considerably also proved simple but interesting where he not only struggles with the work ethic of new employees, but has to fend off being hit on by a pretty work colleague in which a relationship would cause problems looking after Rin. If you merge in some light-hearted comedy at the expense of childish humor and misconceptions in Japanese elementary school culture with the interesting plot you get something that is rewarding to read, but unfortunately didn’t have as much of a focus as the previous two installments.

To quickly discuss the design element of this series, even after the year since I last reviewed the manga releases I still think it is pretty good. While this series is cute, it is not cute as you would expect a series such as Strawberry Marshmallow or Aishiteruze Baby to be…. instead Yumi Unita chooses to take a more simplistic approach to her designs and emphasizing the “cuteness” through character expressions and the plot over overloading each page with excessive amounts of art which may have detracted from the story being told. To bring back an old friend of mine, as with previous volumes the “Void of White Nothingness” is present on a number of pages, but less prevalent then before with some considerably well designed environments albeit simplistic at points.

With a new (hopefully better) year ahead of us, it also means that fans of manga and light novels have waves of new publications...
Read more
Artbooks