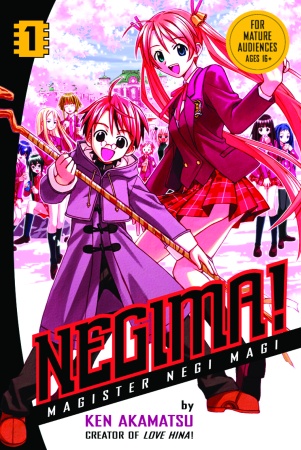 Negima is also a special manga series to me. After finishing reading Love Hina (Which took me a fair while as I wasn’t really into the manga yet), I just happened to find the first volume of this in my local library. I remember finding this volume rather interesting and then going on to read every chapter of the series to date, as well as watching all the series, including reviewing Negima!? and its OVA’s as well as the Live Action Series. After a few years however, can it compete with some of the newer series that I have read?

Artwork: Having previously read Ken Akamatsu’s previous titles such as Love Hina and A.I Love You, you will easily find that character designs overlap. For example, Nodoka closely resembles Shinobu from Love Hina and Kaede closely resembles Kitsune also from Love Hina just as an example. No attention to detail has been missed, even considering that 31 Female students who look distinctly different are used not including Negi and all the other staff. Backdrops are also of high quality, with no surface being left empty. Simply…. for a manga that was started in early 2003 and still going strong today, it is very very good!

Characters/Storyline: The series has a storyline that at first stuck me as kind of basic, kind of like Harry Potter (Which is referenced in this volume) as well as a few other series, however this only lasted the first chapter or so. After that, I was extremely impressed with it all! The series starts off with a young British 10 year old named Negi who after completing his magic academy, is now trying to gain the same title as his father via taking his randomly assigned training. His training of course, is “A Teacher in Japan“. He is then made to take classes at Mahora Academy, a school for female students as the homeroom teacher for class 2-A.

His class of 31 students ranging from a loud-mouthed girl who can cancel any magic he uses to a set of twins who look far to young for middle school and even to a group of students who are trained in arts such as gunplay and swordfighting. The variety is wide which forces no student to become background characters at this point (Nay a few who do so purposefully).

The story in this volume ranges from Negi entering the grounds, already on Asuna’s bad books for both taking away her beloved Takahata-sensei’s classroom place, Asuna forcing Negi to take a bath with disarsterous affects, saving falling girls from staircases and even a volleyball match which could turn deadly. Enough I think to keep you interested throughout the whole volume.

“I am aware that I usually keep these seperate, but I wrote those two together back accident”

Extras: Each volume is packed full of extras:

This is what is usually added into a volume of Negima, however there are occasions where one or two things may be added or removed.

As you can see, I gave it a perfect score as it fulfills my criteria for everything a perfect manga should have and it was the manga that pushed me over into dealing with a lot more manga, as well as getting me into similar anime series! Thus it recieves a very rare S rating!

Description: Ten-year-old prodigy Negi Springfield, has just graduated from magic academy. He dreams of becoming a master wizard. Instead he’s sent to Japan to teach English . . . at an all-girls high school! All the students are delighted with their cute new teacher—except for Asuna, who resents Negi for replacing the teacher she secretly has a crush on.

Although he is forbidden to display his magical powers, sometimes Negi can’t resist. And when Asuna discovers Negi’s secret, she vows to make his life as difficult as possible— just the thing to prepare Negi for the challenges of life as a master wizard!