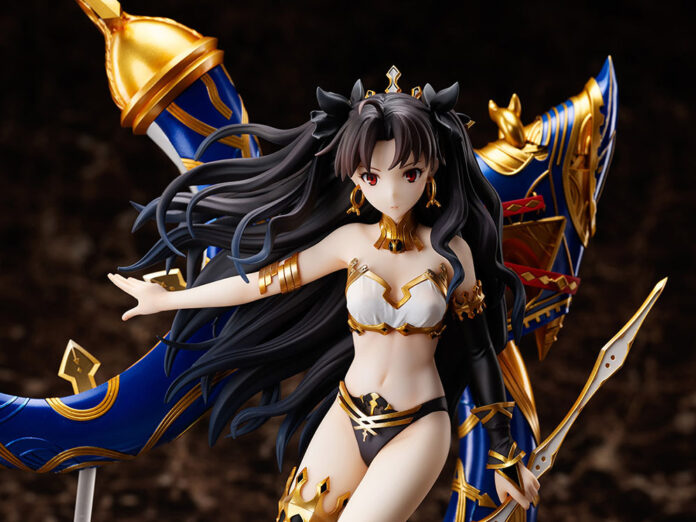 The smartdevice mobile game Fate/Grand Order has introduced us to many incredibly designed characters, adapted from real life and in-universe lore. From a cutesy character adapted from ‘Salem Witch Hunts’ figure Abigail Williams to the iconic Sir Lancelot, there are many interesting characters to unlock and draw into RPG combat. Over the years, many of these characters have been adapted into figures, with more previewed for release over the coming months and years.

The latest character to receive a figure adaptation is the Archer class servant Ishtar, who claims the body of one of the franchise’s notable protagonists – Rin Tohsaka. This impressive figure, due to release in January 2021, is being manufactured by FuRyu, with sculpt work by Iso Moineau. You can see official product shots of the 1/7 scale (Approximately 280mm tall) creation below:

Released as part of FuRyu’s F:NEX brand, pre-orders are now open via select Japanese retailers at a standard retail price of 22,400 yen. The official registration period runs from today until 20 November 2020, but may vary depending on preorder numbers. As of writing, there has been no announced special edition with alternate colour schemes, although do check your favourite figure retailer for any bonus goodies they may be offering alongside her.

We need more cuteness in this world! While it is hard to switch off...

With Cygames' smartdevice RPG now being active for a few years in the Japanese...

Following the successful release of Persona 5 on the PlayStation 3 and PlayStation 4,...
Previous articleQPAC’s Queensland’s Own Season to Support Audience Capacities of Up to 50%
Next articleLatest Persona 5 Figure Features Ann Takamaki Ready to Dance!
Twitter Youtube
© The Otaku's Study