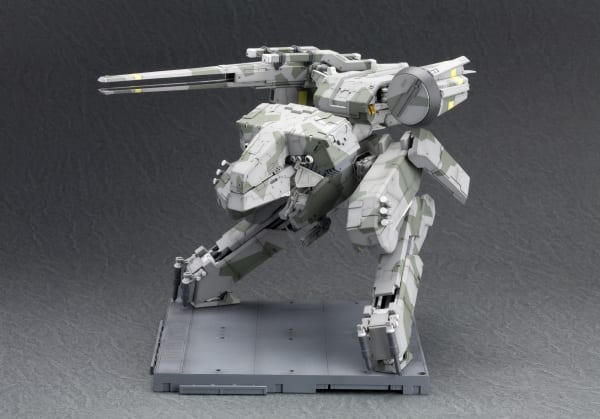 With plenty of stealthy takedowns and espionage suspense the Metal Gear series of video games have been thrilling players for 25 years. One of the main adversaries, the all-terrain nuclear tanks codenamed Metal Gear provide a formable challenge to all that oppose them. In Metal Gear Solid Metal Gear Rex was introduced and soon became a fan favorite.

Katobukiya have today announced their intentions on releasing a model kit of Metal Gear Rex, and

is what they hope will be one of the most accurate and highly detailed representations of this steel behemoth.

Designed by Yoji Shinkawa, REX stands on massively armored legs and wields a huge railgun in addition to gatling guns, missiles, and a laser. The aerodynamic main body has a forward pointing cockpit and a radome to send the pilot additional data.  The REX model kit stands nearly 9 inches tall (1/100 scale) and has multiple points of articulation including legs that fold up allowing the cockpit to rest on the ground.  The Gear is comprised of 600 pre-colored pieces and is recommended for experienced model builders.

Also included are four 1/100th scale figures of game characters, allowing for the recreation of scenes from the game!