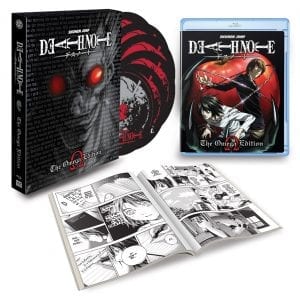 From four-episode volumes to complete season collections, the Death Note TV anime has been available on store shelves for many years now. But while the media format has been available for quite some time now, no publisher has decided to make the entire 37-episode anime series available on Blu-ray.. until now.

North American anime and manga publisher VIZ Media have confirmed that they will be releasing Death Note Complete Series on Blu-ray starting March 1st – in order words, next Tuesday. A total of two different volumes will be available at different price points.

The first of these editions can be considered the standard edition set, coming with the 37-episodes across five discs, with each episode presented in 1080p resolution video and five audio languages (Japanese, English, Spanish, Portuguese and French). The Blu-ray release will also include three hours of bonus content, including interviews with the Japanese creators, behind-the-scenes footage with the English and Japanese voice casts, production art, audio commentary and more. This edition can be picked up for $54.97 USD.

For those looking to spend a little bit more money, you might be interested in picking up the Death Note: The Omega Edition Blu-ray Limited Edition set. This includes all the above features, in addition to a 64-page booklet which features the original manga pilot story packaged inside an exclusive chipboard box. This edition can be picked up for $69.99 USD.

In DEATH NOTE, Light Yagami is a genius high school student who is about to learn about life through a book of death. When a bored shinigami, a god of death, named Ryuk drops a black notebook called a Death Note, Light receives power over life and death with the stroke of a pen. Determined to use this dark gift for the best, Light sets out to rid the world of evil – namely the people he believes to be evil. Should anyone own such power? The consequences of Light’s actions will set the world ablaze.