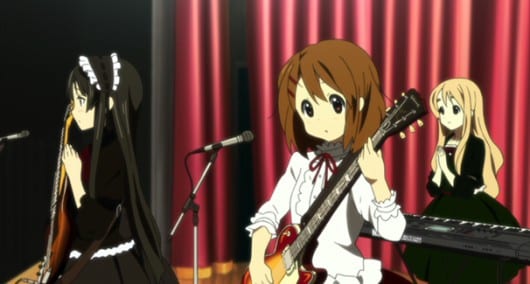 Shifting their attention several months into the future, North American anime publisher Sentai Filmworks have shared information on what will be landing in store shelves during the month of September 2015. This includes their Sentai Classics release of ‘Appleseed’, the newly acquired HAMATORA and a Blu-ray collection of K-ON! Season 1.

More information on each release can be found below:

Argevollen Collection 1
1st September 2015 | DVD/Blu-ray | Japanese Dub | $49.98/$59.98 | 300 Minutes
Tokimune Susumu has every reason to distrust the military and question orders.  His sister has already died in the service of the Arandas military, and his secret reason for enlisting is to ferret out the truth behind her mysterious death.  So, when a civilian convoy is in jeopardy and his own battle mech is destroyed, Susumu’s all too ready to break ranks and jump into the cockpit of the experimental Argevollen.  What he isn’t expecting, however, is that activating the Argevollen conforms it to his mind alone.  Now he’s on the frontline of the ongoing meat-grinder that the war between Arandas and Ingelmia has become, and his only certain ally is an attractive civilian contractor whose reasons for being in the war are as convoluted as his own.  Knowledge is the most powerful weapon and Truth is the first victim as the mechs of war are unleashed in ARGEVOLLEN!

K-ON! Season 1
1st September 2015 | Blu-ray | Hybrid Dub | $59.98 | 350 Minutes
Rock n’ Roll may never die, but the Sakuragoaka Girl’s High School Light Music Club might not be here to stay unless would-be drummer Ritsu Tainaka can find three more members to replace the graduated seniors.  Determined to see that the beat goes on, Ritsu can get a little help from her friend Mio Akiyama on bass, and together they might be able to convince choir-inclined Tsumugi Kotobuki to join on the keyboards.  But even then, they’ll still need a hero, preferably of the juke-box variety with stars in her eyes.  Instead they find Yui Hirasawa, who’s looking for a club to join and who’s never held a guitar in her life.  But when Yui does pick up a beat-up six-string, it feels good in her hands, and it doesn’t take long to understand that maybe she’s finally found a place where she belongs.  Because you can’t stop the music when four girls share a dream, even if it’s something as crazy as someday playing at the famous Budokan.  It’s going to be a long and winding road, but if they find their passion and follow their muse, they could go anywhere in K-ON!

SNAFU
1st September 2015 | Blu-ray | Japanese Dub | $59.98 | 325 Minutes
Opposites may attract, but putting them together can result in chemical burns, electric shocks, and explosions. Enter Hachiman Hikigaya, a pessimistic high school student with no friends, no interest in making any, and the firm belief that everyone else’s cherished high school experiences are either delusions or outright lies. Hachiman finds himself coerced by his well-meaning student advisor into joining the one member Service Club. There he encounters club founder Yukino Yukinoshita, a smart, attractive, walking superiority complex who looks down on the entire student body. These two negative personalities are quick to attract Yui Yuigahama, who’s cute, bright, cheerful, and needs the Service Club’s help to… bake cookies? Is this a recipe for romance or the precursor for a nuclear meltdown?  Will there be cookies, nookie, or a reason for everyone to play hooky?  Get ready for rom-com gone totally wrong as the barrage a trois of the Service Club is unleashed on the unsuspecting student body in MY TEEN ROMANTIC COMEDY – SNAFU!

Appleseed
8th September 2015 | DVD+Blu-ray Combo | Hybrid Dub | $19.98 | 105 Minutes
Plucked from the last battlefields of the final war, mercenary Deunan Knute finds herself pressed into duty with the ESWAT, defenders of the Utopian city of Olympus.  But serpents beneath the peaceful surface of this apparent Garden of Eden, and new seeds of destruction have already been planted!  Now it’s up to Deunan and her former lover, the now-cyborg Briareos, to unravel a deadly web of plots that threaten to bring down Olympus from within!  With blazing battles between giant Land-Mates and state of the art animation that set a new standard for cg anime, the spectacular feature film from creator Shirow Masamune (Ghost In the Shell) and director Shinji Aramaki is back in an amazing new special edition that pushes home entertainment technology to its limits!  Get ready to survive the future with the animated masterpiece APPLESEED!

Patlabor WXIII
8th September 2015 | DVD/Blu-ray | Hybrid Dub | $29.98/$39.98 | 107 Minutes
The SV2’s giant Ingram Patrol Labors may be the ultimate in crime-fighting technology, but there are never enough to tackle every pending case.   So when a mysterious series of deadly attacks targets Labor operators across Tokyo’s harbor region, the job goes to “conventional” detectives Hata and Kusumi.  After all, just because it looks like a giant robot created crime doesn’t mean that it is a giant robot-created crime, and deep inside a web of half-truths and government cover-ups, the detectives uncover a secret biological weapons project called WXIII.  But while this secret may have been buried, it’s still very much alive.  And that’s when having the armored force of the SV2 as backup may become a literal lifesaver for the entire city in WXIII – PATLABOR THE MOVIE 3!   As a special bonus, this deluxe edition of the final animated feature in the Patlabor franchise also includes the acclaimed MINIPATO CG animated shorts.

The Comic Artist and His Assistants
15th September 2015 | DVD/Blu-ray | Japanese Dub | $39.98/$49.98 | 205 Minutes
Lechery, perversion and a lack of respect for the feelings of others are all qualities that would normally look really bad on one’s resume.  For manga artist Yuki Aito, however, they’re the fundamentals of his art.  And that art is good enough that managing editor Mihari will put up with the panicked panty runs, barrages of breast jokes and other even lower-brow forms of self-amusement that Yuki wallows in.  But when the continuing cavalcade of carnal crudity causes Yuki to get off his work schedule, Mihari’s last straw breaks and she’s forced to bring in a team of assistants.  Young, attractive, female assistants.  Needless to say, it’s not the schedule that Yuki will be trying to get on top of now, and getting a four-panel strip out on time may involve stripping AND drawing and quartering.   But if misery loves company, then Mihari will certainly have found it with THE COMIC ARTIST AND HIS ASSISTANTS!

Hamatora
22nd September 2015 | DVD/Blu-ray | Hybrid Dub | $59.98/$69.98 | 300 Minutes
Nowhere may seem like just another Yokohama cafe, but as with many of its employees, this apparently innocent eatery leads a double life. Because Nowhere is also where you can find Hamatora, the mysterious detective agency run by P.I.s who are also M.H.s. That’s M.H. as in Minimum Holders, individuals gifted with extraordinary powers and abilities.  For the right price, you can hire founder Nice, who moves at the speed of sound, and partner Murasaki, whose super strength and near invulnerability are a significant asset.  Of course, with incredible talents like these up their sleeves, Nice may not decide to take a case unless it personally interests him.  But when a series of serial murders all turn out to involve other Minimum Holders, that interest is about to become extremely personal.  Something monstrous is going on, and Minimum Holders as a class may be targeted for extinction in HAMATORA – THE ANIMATION!

Sabagebu! Survival Game Club
22nd September 2015 | DVD/Blu-ray | Japanese Dub | $49.98/$59.98 | 300 Minutes
Momoko’s family moves a lot, so she’s always “that new girl” and the schools she’s attended have all blurred together.  Until her first day at Aogiri High, that is, where she’s rescued by an armed vigilante, assaulted by a platypus and coerced into joining a secret organization of gun-toting female commandos.  Okay, maybe that last one is really just the school’s survival club, but the platypus is real and so are the extremes that club president Miou is willing to execute to recruit Momoko.  Can uber-jaded Momoko’s body armor-clad heart resist the charms of a girl who’s all too ready to whip out her twin Desert Eagles in defense of another girl’s virtue?  Especially when it turns out that Momoko has her own talent for air pistols and senseless violence?  Their course is locked and the odds are loaded as the rest of the club joins in the firefight in Sabagebu! – Survival Game Club!

Nobunaga the Fool Collection 2
29th September 2015 | DVD/Blu-ray | Hybrid Dub | $59.98/$69.98 | 275 Minutes
As the ley-lines of the Western Star near the point of collapse, the threat of invasion continues to escalate.  Fearing attack from their sister world, the Eastern Star braces for the eruption of full-scale interstellar war.  Meanwhile, betrayal follows betrayal as the factions seeking the Holy Grail continue to turn on each other.  The Table is shattered and with Jeanne in the clutches of Cesare Borgia and Machiavelli, the seer seems destined for torture and burning at the stake.  Will history repeat itself or will Nobu be able to pull off a daring rescue?  King Arthur’s horrifying plan comes to fruition and the fates of two planets depend on the actions of one man in the sense shattering second collection of NOBUNAGA THE FOOL!

Persona 4 the Animation Collector’s Edition
29th September 2015 | DVD+Blu-ray Combo | Hybrid Dub | $139.98 | 670 Minutes
When Yu Narukami moves to the country town of Inaba to stay with his uncle and cousin, he’s expecting more peace and quiet than he’s been used to in the big city. What he isn’t expecting is for his uncle’s job as a police detective to spill over into his own life. Or for the murders that are occurring across town to be somehow linked to Yu’s own strange experiences, odd local weather patterns, and a mysterious TV show world that seems to be attempting to get Yu to enter it! Now, together with a new group of friends, Yu must plunge into a bizarre alternate reality where he gains unique abilities that will either help him solve the riddle of the mystery killer, or lead him to his doom. Journey into the Velvet Room and beyond as the hit PlayStation 2® game becomes a spectacular anime in the ultimate complete collector’s edition of PERSONA 4 – the Animation!