Hanabee Confirm Recall of The Familia of Zero: Knight of the Twin Moons 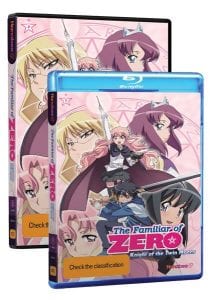 While I do not personally see the need to send my copy of the anime back to the publisher over such as trivial matter, Australian anime publisher Hanabee Entertainment have confirmed they are recalling every copy of The Familiar of Zero: Knight of the Twin Moons.

This recall is due to them accidentally leaving the details of Season 1’s release on the cover of Season 2. Unlike the first season which was dubbed into English by Geneon Entertainment many years ago, the second and third seasons only include the original Japanese dub. Therefore, it was potentially misleading when the back cover indicated that Knight of the Twin Moons includes dual-audio. Both DVD and Blu-ray copies seem to have been affected by this misprint.

Those who purchased a copy before the cover was updated and would like the new fixed slick, you can email them at the details found HERE. Hanabee have stated “We never meant to mislead anyone by leaving the information from Season 1 on the Season 2 design” and “we’re so sorry for any inconvenience caused”.