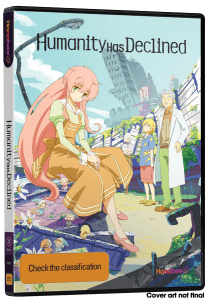 Continuing their 7 Days of Christmas event, Australian anime publisher Hanabee Entertainment have announced that they now hold the rights to Humanity Has Declined (Aka. Jinrui wa Suitai Shimashita / 人類は衰退しました). This 2012 anime series is based on the original light novel series written by Romeo Tanaka.

Furthermore, Hanabee have confirmed that it will be available on store shelves from March 4th 2015 at a price of $49.99 on DVD. As the choice of format may already imply, this release will only feature all 13-episodes with the original Japanese dub.

Watashi is about to learn what it means to be human.

The human race has been dwindling for years as birth rates decline, food has become scarce and other beings have come to capitalise on humanities old territories. With only a handful of humans remaining the rest of Earth has become occupied by faeries, incredibly intelligent and tiny mystical creatures.

Until one day a human girl named Watashi, learns she has an important role to play on behalf of humanity in this new world. As she returns to her home town Watashi inherits her grandfather’s position as a mediator between all of the new beings on Earth. Her new job isn’t going to be easy and requires more patience and experience than she knows. Lucky for her that when you fail humanity has is good at getting back up and trying again.