Following the apparent success of Persona 4 the Animation in Japan, Devil Survivor 2 the Animation was the second in a series of Megami Tensei adaptations to hit television screens across Japan in recent years. Based on the Nintendo DS game of the same name, this delivers a much more serious storyline that forgoes much of the social link-esuqe character development for demon on demon action. I was ecstatic when first hearing about the series being commissioned, and still considered it a “promising anime” during my first impressions review back in April 2013. Thanks to the guys at Hanabee Entertainment, this complete 13-episode season is now available for purchase on store shelves across Australia and New Zealand. Having now had a chance to check out the full series… read on to see if my expectations were met.

Devil Survivor 2 the Animation follows main protagonist Hibiki Kuze, a high-achieving high school student who has just wrapped up a practice exam alongside his childhood friend Daichi Shijima. On their way home, Hibiki is introduced to a new mobile service known as “Nicaea β ver”, which purports to show the death of your friends before they happen. While assumed to be a joke site, things take a turn for the worst when they each receive an incredibly realistic “Death Clip” showing each other being crushed by a train… the event happening only moments later. 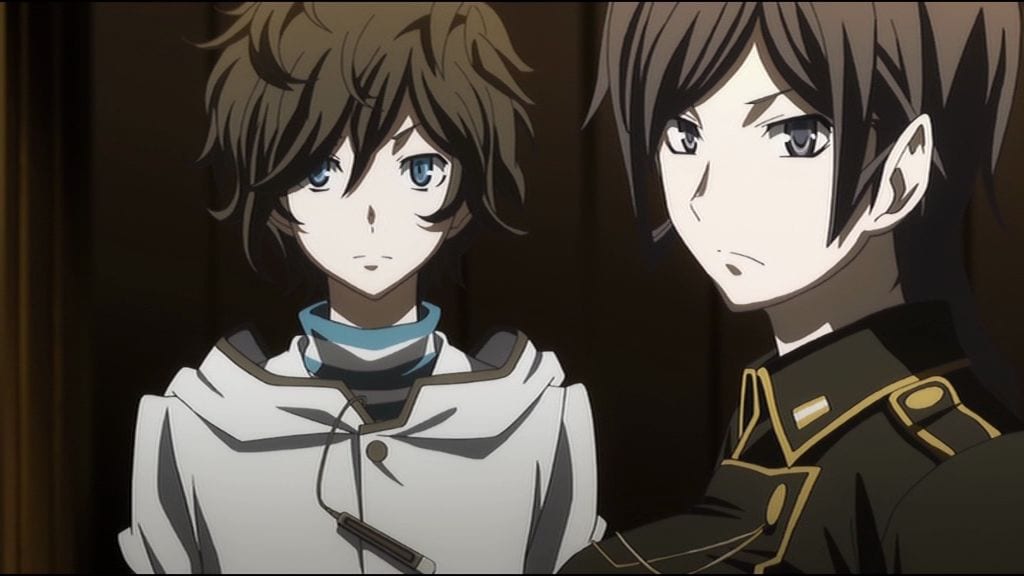 Succumbing to imminent death, their Nicaea avatar pops up to give them one more chance at life. This sees Hibiki, Daichi and fellow classmate Io Nitta escape their fate, but also sets them on a path of having to defeat demons using their newly acquired Demon Summoning app – with Hibiki in particular wielding the powerful “Avatar Class” demon Byakko. While initially alone and unaware of what is going on, the trio eventually come to the attention of a hidden organization known as JP’s. This is when they learn about the important fights over the impending 7-Day Armageddon period against mysterious invaders known as the Septentriones. Should they succeed… the world will be spared. Should they fail… humanity will cease to exist.

While there is great potential to score a bit hit with a video game to anime adaptation, one of the major concerns to many fans would be just how well the production team manage to fit an entire video game storyline into a 13-episode (or more) season. There is a very real risk that they could either run out of time and skip over / rush key events OR decide to deviate from the key plot and do a very poor just at delivering an experience that fans of the series would be expecting. Fortunately Devil Survivor 2 the Animation is neither, opting to go down the “complete rewrite” route that made use of core storyline events (Such as the Septentriones and important events from each day) but adapted the use of characters to better suit the limited time frame. While I was hesitant and skeptical about this change at first, this anime adaptation turned out to be a well-written tale that was action-packed but also provided a plentiful supply of plot throughout, even if it may not meet the standard of the original game. 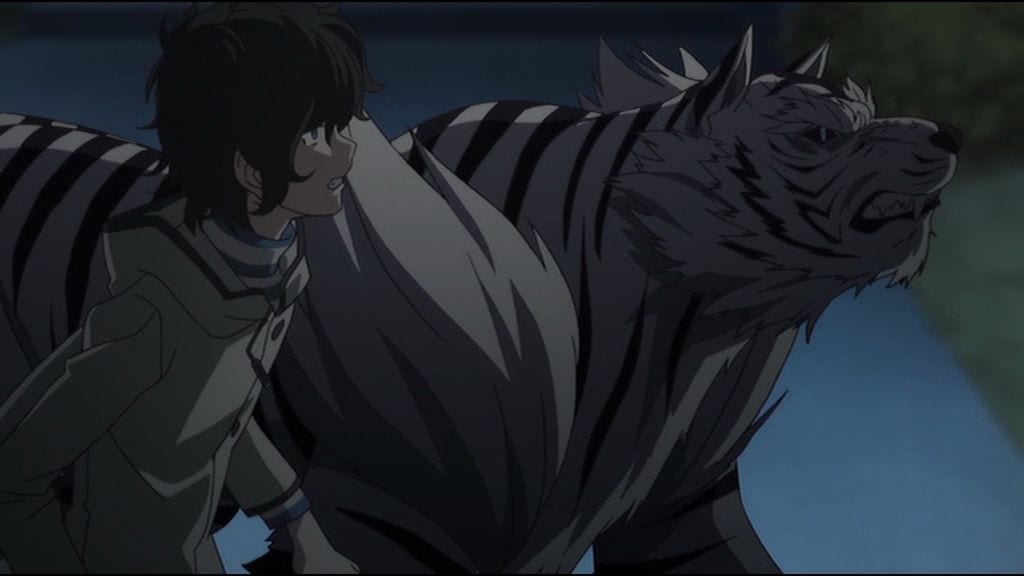 The adapted storyline focused heavily on the relationships between and roles of Hibiki, Yamato Hotsuin (Leader of the JP’s) and the mysterious Anguished One, with character development and the storyline itself primarily focused on these three. Other characters have either secondary or minor roles throughout the events, with characters like Yuzure Akie (Joe) appearing much later and with a significantly reduced role from the game (Where he was the first person outside the original trio to join your party). Unlike the video game where your actions have meaningful consequences in determining who stays alive and who dies, the writers have no qualms in killing off other characters quicker than Gen Urobuchi did in Puella Magi Madoka Magica (Although nowhere near as extravagantly). While it may come as a surprise during the first battle someone dies in, it highlights that no character is safe in a world that is facing its nearly inevitable demise, especially when the fighters are mostly civilians with no prior demon summoning experience.

While character roles, progression and even the conclusion have all been rewritten to better suit the linear anime style of storytelling, many of the charms that one would associate with a Megami Tensei experience are still present, with references to demon classes, lore and other aspects being frequently made. The demon battles are particularly satisfying and far surpass what was presented in Persona 4 the Animation, with fast-paced and plot-driven action leaving myself at least looking forward to the next fight. Each fight delivers a realistic sense of urgency and peril as the great threat posed by each of the distinct Septentriones test the remaining Demon Summoners, often taking a whole episode if not more to resolve. The variety of different demons that have been reprised from the game and used in battle were also welcome, although the localization team made a significant boo-boo by referring to Black Frost as ATLUS’ own mascot Jack Frost. 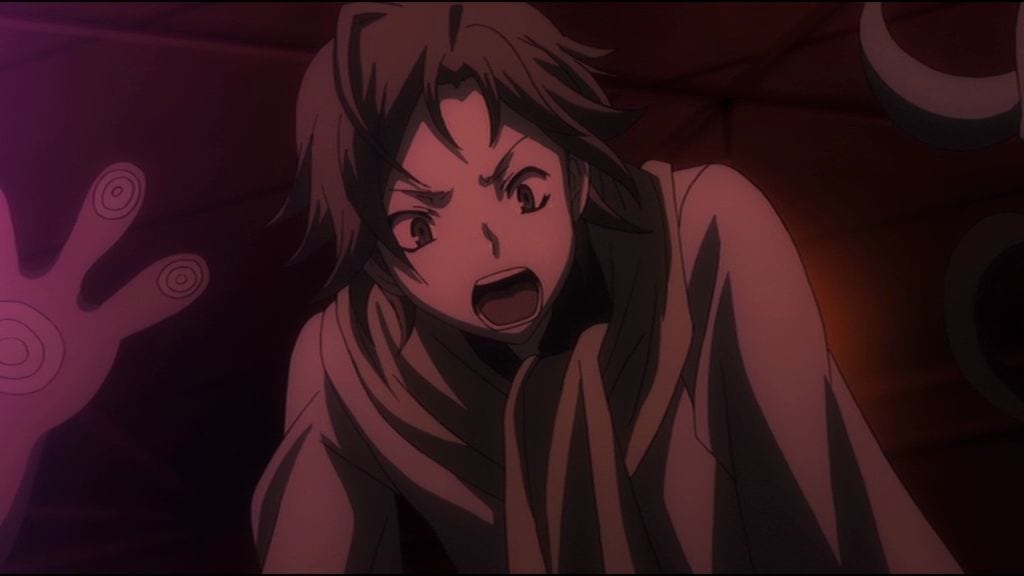 Justified or not, the omission of key events and character development obviously weakened the potential of Devil Survivor 2 the Animation, and makes it nothing but a shadow of the video game it is based on. The simple fact is that this really needed an extra season of episodes to really flesh out the details and embrace the richness of its source material. This especially holds true for the lackluster conclusion,which would have benefited from an entire arc dedicated to the divide between the character groups and the outcomes they desire. Devil Survivor 2 the Animation doesn’t feel rushed for the most part, but there was tremendous room for improvement.

While Persona 4 the Animation may have been given the Blu-ray treatment in both North America and Australia, Devil Survivor 2 the Animation was only deemed worthy enough to receive a DVD release in both regions. In all honesty I had no qualms with the design quality of this series with: character designs well adapted from their original character portraits, some nice environment designs and action-oriented battle animation that trumped anything that P4tA provided in my opinion. My only complaints were that they could have put more resources into maintaining a consistent visual quality and that the characters do spend a fair bit of time in dimly lit or shadowy areas, which didn’t always allow the visuals to shine. 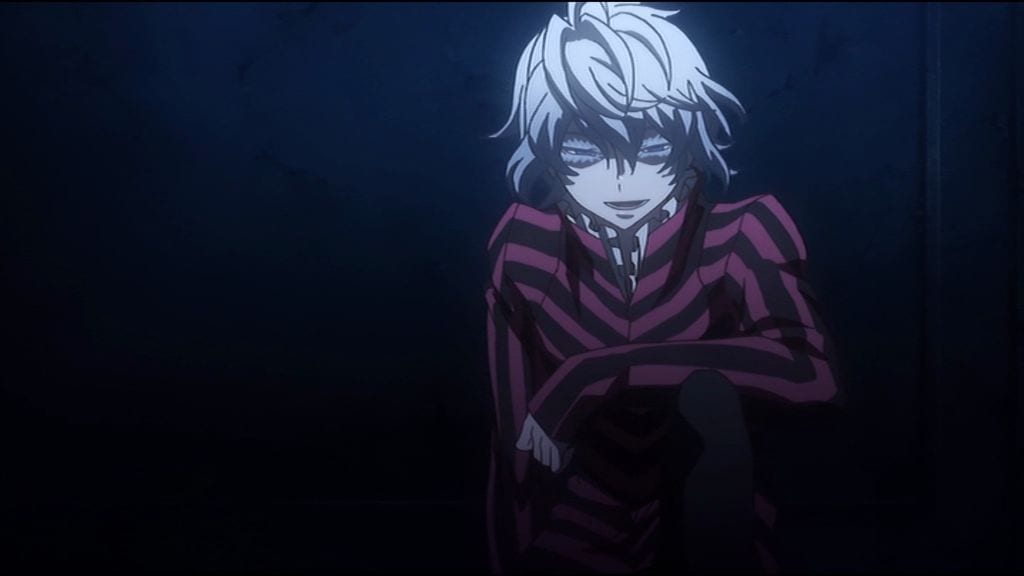 While its not that I particularly disliked the opening theme “Take Your Way” by “livetune adding Fukase (from SEKAI NO OWARI)”, I don’t think it suited the tone of what Devil Survivor 2 the Animation sought to provide viewers. Personally I would have loved a remixed version of the game’s opening theme “Mugen no Sekai” by “Kinuko Saga”, which you can sample for yourself HERE. The ending theme, “Be” by “Song Riders” worked well however, coupled with simple yet very effective animation.

Despite Devil Survivor 2 the Animation not receiving a Blu-ray release, North American publisher Sentai Filmworks did opt to commission their own English dub for the series. Overall the new voice cast complemented their Japanese counterparts fairly well, and I would love to see them reprise their roles should ATLUS USA ever decide to take up Devil Survivor 2: Break Record which is set to launch in Japan next year. 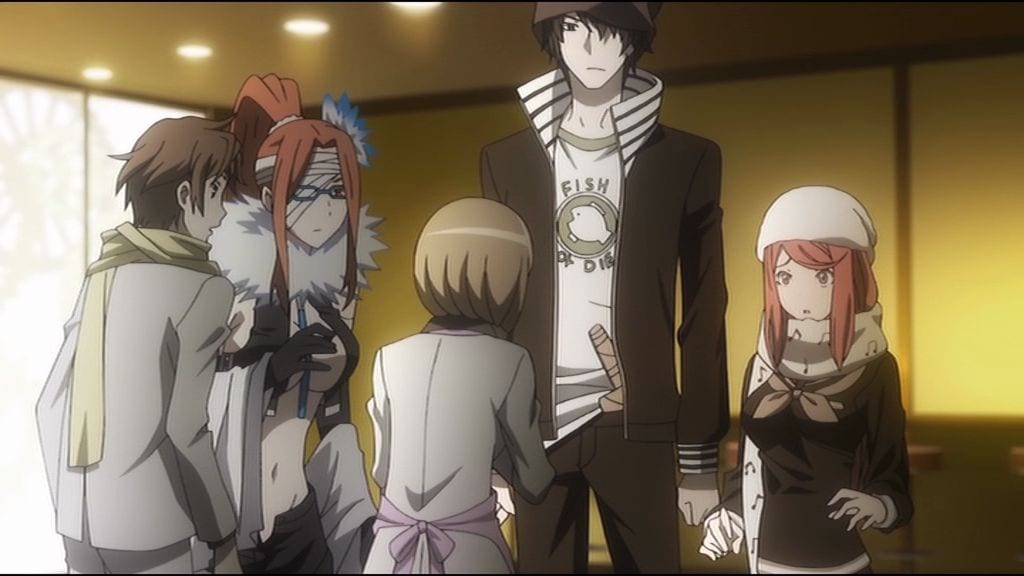 While Sentai Filmworks have released a few Japanese-dubbed anime series with a wealth of fantastic extra content including Croisee in a Foreign Labyrinth and Kurenai, Devil Survivor 2 the Animation only had the bare minimum of extra goodies. This transferred over to the Australian release I am reviewing, which included only clean opening and ending sequences. A set of four other trailers from Hanabee Entertainment: Majestic Prince, Gatchaman Crowds, Amnesia and Watamote were also available on-disc.

The Devil Survivor 2 the Animation production team made a decision to require and alter the source material’s plot rather than cramming everything into 13-episodes, and ultimately this was a smart decision that delivered an above average experience. However the series is simply stuck at being “above average”, and would have likely been a more wholesome and fulfilling watch were an extra 12/13 episode season allocated to fully develop the characters and events that take place. Overall, a nice complement to what was a brilliant RPG, and may be an adequate alternative for those who cannot nab themselves a copy.