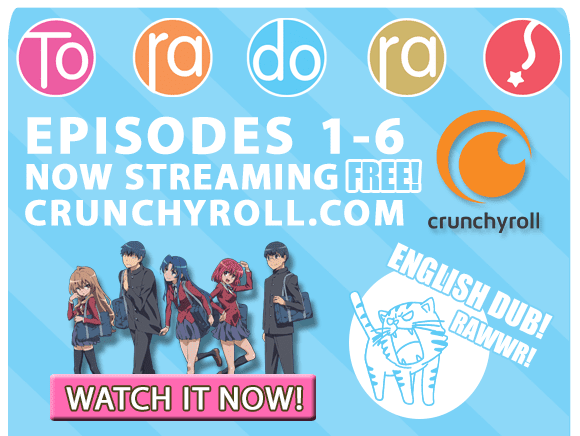 Wanting to test the waters a bit before making a purchase of NIS America’s English dubbed, premium edition release of Toradora!? It has today confirmed that the first six episodes of the series are now being streamed for free via the Crunchyroll streaming service.

My own review of the English dubbed edition can be read HERE.

Ryuji Takasu is unfortunately cursed with his father’s threatening face and is labeled a “delinquent” because of it. Since this makes it difficult for him to meet people, Ryuji falls in love with Minorin, the one girl who does not run away from him. Taiga Aisaka is a notorious girl with the nickname “Palm-top Tiger”. Ryuji bumps into her one day and learns how a true delinquent acts. She is also Minorin’s best friend and happens to have a crush on Ryuji’s closest friend.