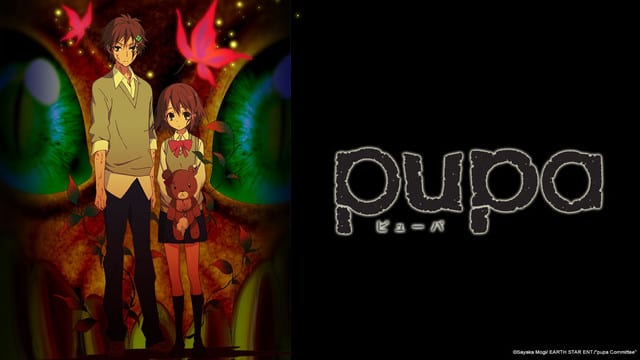 The next announcement from online anime streaming service CrunchyRoll is that they have acquired permission to stream Studio DEEN’s latest anime series Pupa, which is finally being aired in Japan despite an initial delay. Based on the manga from Sayaka Motegi, an episode is to be available to watch weekly from the 9th January 2014 at 12:30PM Pacific Time for Premium Members,with a delay of a week for Free Members.

There is a considerable possibility that this is a title that will have a home video / digital rights acquisition announced for it soon, with the stream being region locked to the United States, Canada and Latin America. As of this post no publisher has come forward with owning the rights.

Pupa tells the story of a brother and sister who both become infected by a virus that transforms the sister, Yume, into a flesh eating monster when hungry, and giving the brother, Utsutsu, superhuman healing and regenerative powers. In a relationship where one takes and the other can give, thus begins the story of Utsutsu and Yume Hasegawa…