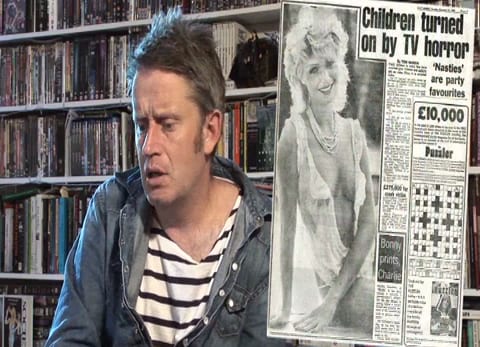 Australian entertainment publisher Siren Visual is all about the niche, and their titles have walked away with a number of awards on this site including 2011 Australian Anime Release of the Year 2011 (Dennou Coil) and their simulcast of Usagi Drop which walked away with my top pick in the AniBlogger Choice Awards 2011. However while their focus has been on anime the past few years, it is hard not to notice that they are also trying to bring in some other unique titles to the Australian market.

One of these is set to be released on the 4th December 2013, Video Nasties: The Definitive Guide. For the first time ever on DVD, trailers to all 72 films that fell afoul to the Director of Public Prosecutions. This three-disc collector’s edition is also set to include a brand new documentary – Video Nasties: Moral Panic, Censorship and Videotape.

To be more specific, the following lists the contents on each disc:

Taking in the explosion of home video, the erosion of civil liberties, the introduction of draconian censorship measures, hysterical press campaigns and the birth of many careers born in blood and videotape, West’s documentary also reflects on the influence this peculiar era still exerts on us today.

Presents the 39 titles that were successfully prosecuted in UK courts and deemed liable to deprave and corrupt. These included: ‘Absurd’, ‘Cannibal Holocaust’, ‘The Driller Killer’, ‘I Spit on Your Grave’, ‘Nightmares in a Damaged Brain’, ‘Snuff’ & ‘Zombie Flesh-Eaters’.

Presents the 33 titles that were initially banned, but then subsequently acquitted and removed from the DPP’s list. These included: ‘Death Trap’, ‘Deep River Savages’, ‘The Evil Dead’, ‘Human Experiments’, ‘The Toolbox Murders’ & Zombie Creeping Flesh.