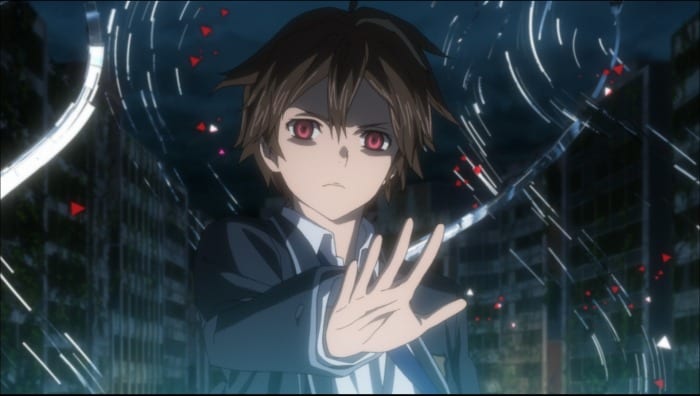 It has been quite a while since I have had the opportunity to review a noitaminA anime series on this site, and this month Madman Entertainment chose to release 2011 title Guilty Crown on DVD and Blu-ray – a direct-to-anime series produced by Production I.G. The series takes place in a futuristic version of Japan which is still standing against the looming threat of the ‘Apocalypse Virus’, which on a Christmas Eve many years before had emerged after a meteorite crashed into the region.

While losing his father during the events of “Lost Christmas”, male protagonist Shu Ouma and his mother reside in one of the safe areas in Japan where he is a normal high school student and is part of his school’s film club. This all changes however when he finds a mysterious girl by the name Inori Yuzuriha in his clubroom and is soon taken away by members of the GHQ – a government organization sent to “aid” Japan in the aftermath of “Lost Christmas”. Choosing to rescue her, he acquires a genetic mutation in his right hand that enables him to pull out soul weapons “voids” from humans – with each human having a different weapon at their disposal – from swords and shears to a camera-gun that can open anything.

From there he is forced into the corner by two organizations vying for his support to take down the other. This series covers the war between the GHQ who claim to maintain peace and order and a rebel group known as Funeral Parlor who believe that the GHQ are overstepping their bounds and desire to liberate Japan for the people. The events of the first DVD / Blu-ray collection result in Shu remaining wary about both groups however going on a number of missions for Funeral Parlor – culminating to a major cliffhanger at the end of episode 11. 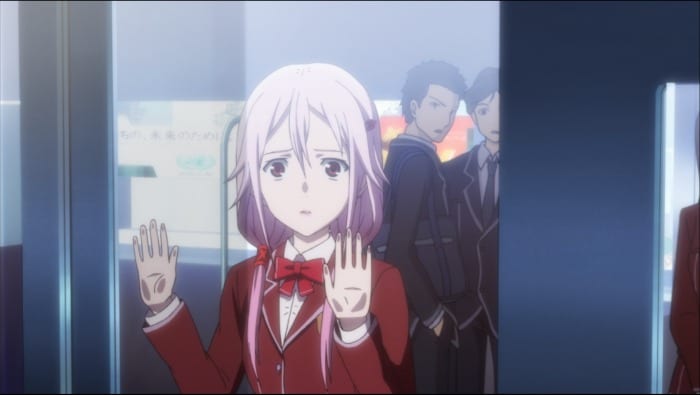 Guilty Crown truly shines in its concept regarding the “Voids” that Shu can pull out from different humans, in lieu of the character passing out and suffering from memory loss. While the named characters do seem to conveniently have the right voids associated to them for almost every scenario the story throws at the viewer, they are creatively used and fulfill the “supernatural” quota to them rather than simply being a basic sword or gun. The concept of the Apocalypse Virus was also interesting and I think especially for some of the more minor episodes, they played it to their advantage given the events and scenarios that were taking place in the meantime – providing some added depth to the world and its character development rather than simply being a reason for the GHQ to be present in Japan.

Unfortunately on the other hand, what really I feel ruins the experience in the first half was Shu himself. It is always good to see a protagonist who hesitates about the actions he takes rather than unnaturally jumping into the action despite a previously shown personality trait, but the issue is that Shu spends far too much time hesitating and jumping between the decision to help and to abandon Funeral Parlor with their missions, to the point that it becomes a generic plot device almost everytime something comes up.

There isn’t much more to say on this series as they do spend the first 11 episodes building up to what I assume will be an intense second half. There are many plot points to build off and many characters they have the opportunity to develop, but it is up to the studio and the writers to make it happen. Guilty Crown Collection 2 is set for launch on the 18th December 2013 in Australia, so it isn’t long now until we find out its conclusion. 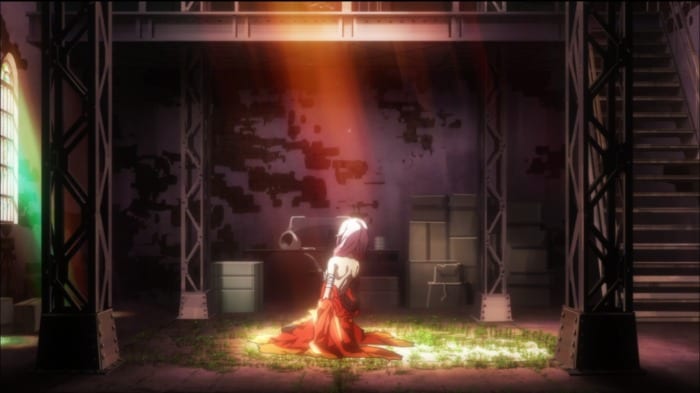 While I expressed surprise last night that The Future Diary was not released on anything more than the DVD format, they would have been bonkers for not releasing Guilty Crown on blu-ray as in my opinion it is the only way to go with this title. The environments and character designs were both impressive, featuring a high level of detailing and suited the futuristic modern setting that they were going for. But the most impressive visual element was when Shu pulls out the Voids from a human target, resulting in some really nice visual effects that give the scenes a “supernatural” feel and are coupled with high quality and fluid animation during the action scenes. They also throw in a few “mecha” elements to the battles, but asides from those involving Shu may come across as being more generic scenes than anything special.

While they do like to throw in a few lyrical songs across the first eleven episodes, a majority of the instrumental soundtrack in Guilty Crown is of high quality and suits any scene the series throws at it. These are supported by the regular opening theme “My Dearest” by Supercell that is a fast paced song bolstered by strong visuals and the ending theme “Departures” also by Supercell which is a simple song with simple animation although differs slightly between episodes.

As with all other Funimation localized anime releases, Guilty Crown comes with both the original Japanese dub and a brand spanking new English dub. The voice cast is suitable for their roles with Austin Tindle and Micah Solusod playing main male leads Shu Ouma and Gai Tsutsugami and Alexis Tipton playing female lead Inori Yuzuriha. Nothing special this time around like other series I have reviewed recently, but they do an acceptable performance of their roles. 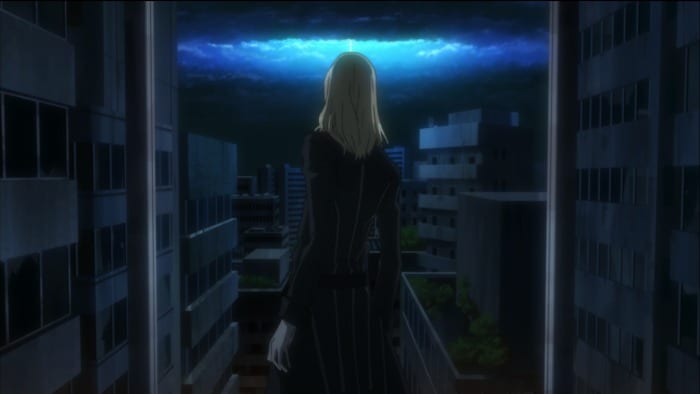 Collection One of Guilty Crown fortunately comes with a very nice compilation of extra on-disc content including:

Overall, while leaving more questions than answers, Guilty Crown Collection One has set itself up to be a promising series with many plot points which I hope they won’t neglect to resolve in its second half. While some of the characters are lacking in development so far, they have made up for it with the interesting “voids” concept, letting no episode go to waste and coupling them with plenty of visual appeal and strong musical backings.