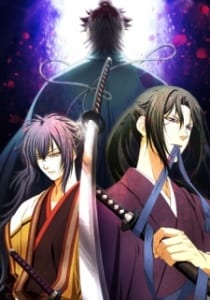 As mentioned earlier, a year after Hanabee Entertainment’s very first anime panel, the company returned to the Sydney Manga and Anime Show (SMASH!) with more acquisition announcements in hand.

For their first of three announcements they confirmed plans to release Hakuoki ~ Dawn of the Shinsengumi (aka. Hakuouki Reimeiroku / 薄桜鬼 黎明録) in Australia on the 2nd October 2013. As with their other installments in the series it is to be available on both DVD and Blu-ray at the prices of $59.99 and $64.99 respectively. All twelve episodes are to be included in the one collection and with both English and Japanese dubs to be included.

What does it mean to be a samurai? Japan is in turmoil; violent civil clashes and murder are running rife and order needs to be established. By decree of the Tokugawa Shogunate the Roshigumi are dispatched to create stability but how much order can they create when they themselves are in turmoil?

At the center stands Ryunosuke Ibuki, son of a samurai, who has incurred a blood debt to Serizawa, leader to the Roshigumi. Now forced to be a slave, Ryunosuke is a part of a system he hates. However there just might be hope with Isami Kondo and his rag tag group of misfits; honour to the samurai name might just be restored. This is the beginning of it all, of how Isami Kondo was able to set up the Shinsengumi before its downfall.