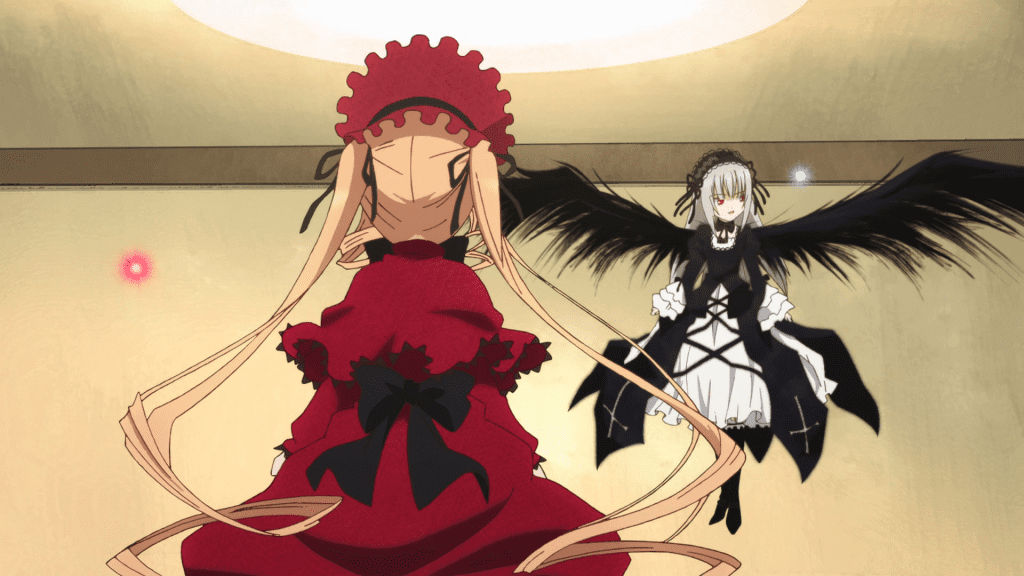 After more than six years off the air, fans of the Rozen Maiden series finally have a brand new anime installment to sink their eyes into. The original two seasons of the anime series veered off course from the original manga source material quite early on, leading to the second season featuring an entirely new plot-line to fill the gaps that had yet been covered by Peach-Pit. Rather than continue off on the tangent that Rozen Maiden Traumend concluded with back in 2006 – under new direction and an entirely new studio they have chosen to reboot the series.

However rather than delve on the events that were covered in the first eight volumes of the manga (Incidentally the only eight volumes released in English albeit now discontinued), they have chosen to pretty much start off  Zurückspulen with the “Not-Wound Jun” plotline which started when the second manga series began in Weekly Young Jump in 2008. But before this could happen, the first episode was dedicated to recapping the events of the first eight volumes of the manga series as abruptly as possible with the second episode set to begin following the “Not Wound Jun”. If you are familiar with the manga volumes or at the very least watched the original anime series you should be fine – but it was unfortunately not the best introduction to the Rozen Maiden franchise and would require supplementation from other sources. 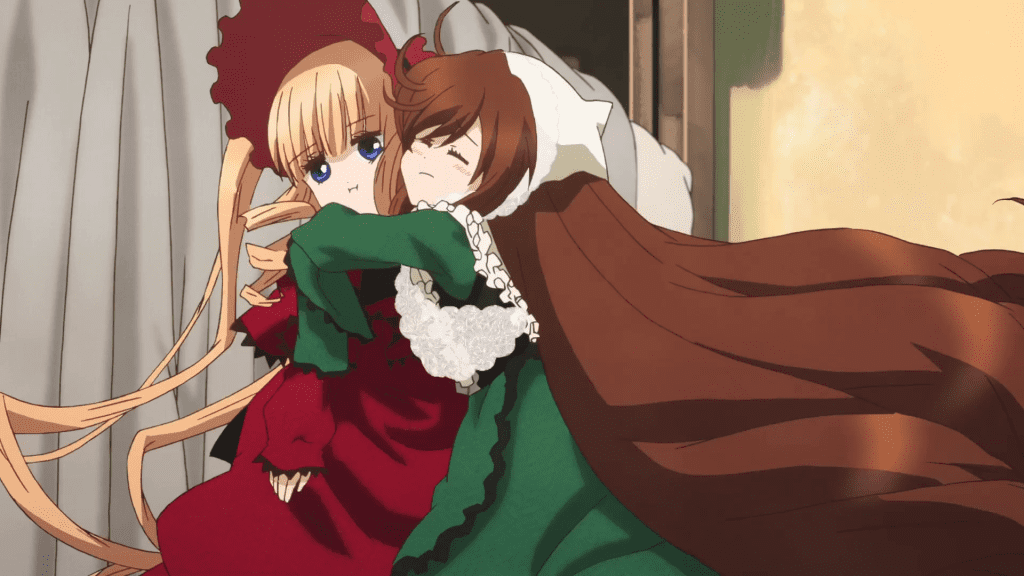 To give newcomers a general overview of the series, Rozen Maiden surrounds seven supernatural dolls who were created by a man named Rozen. Each of them contain a “Rosa Mystica” which are the source of their life and allow them to move around. However only one of them are destined to survive, and are required to form contracts with humans to provide them with the power to fight each other in the “Alice Game”. The last of the dolls to remain standing and collect all seven Rosa Mystica are to become the perfect girl “Alice”. A student by the name of Jun Sakurada who has withdrawn himself from the outside world one day finds a mysterious letter asking him to “Wind” or “Not Wind”. Choosing to wind, he comes into posession of the 5th Rozen Maiden doll “Shinku” and gets dragged into the events of this eras Alice Games.

I am left with mixed feelings about this first episode. Having read the first eight volumes of the manga series prior to watching this, I was glad that they won’t linger on trivial matters as the earlier anime seasons did. However at the same time they passed up or glanced over much of the development and events that really need to be understood to both appreciate and/or understand future events. Especially with the events surrounding Souseiseki and Hinaichigo they were reduced to mere scenes before their passing – far too little time to really appreciate the characters. At the moment I am going to assume that this recap despite its tendency to skip over events and characters is canon to the manga series… although time will tell if this is true. I do think however it needed to be an episode or two longer to really set the tone for the rest of the series for newcomers. 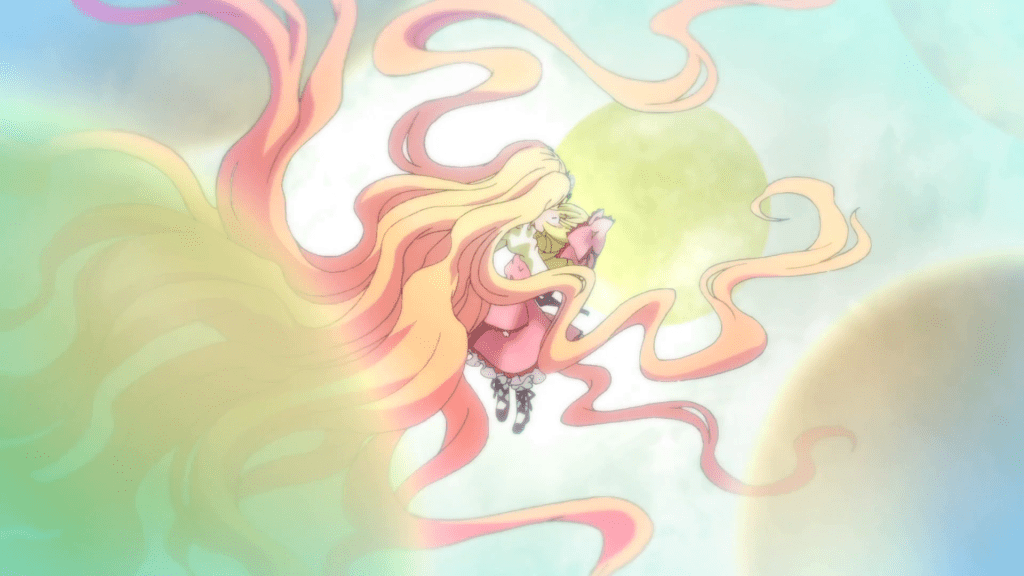 While the production values by Studio DEEN over recent years has been pretty hit and miss in my books for the last couple of years, I was impressed with what was provided in this episode at the very least. While their design style is not something I think just any anime series could pull off, given the genre and the source material they had I think it worked much better than earlier anime installments. The detail put into the environment designs was quite simple and constructed using a simpler colour palette that cames off with a sort of water colour motif. In turn this provided a solid support for the more prominent and vibrant colours / detailing used on designing the dolls and other characters themselves.

Despite recapping 8 manga volumes, we didn’t get too much a look at the fast-paced animation that was present in several of the earlier anime season episodes. That being said, I quite liked some of the ideas that went into the animation – especially in the introduction of Suigintou and the (Brief 30 second) battle that ensues from this event. 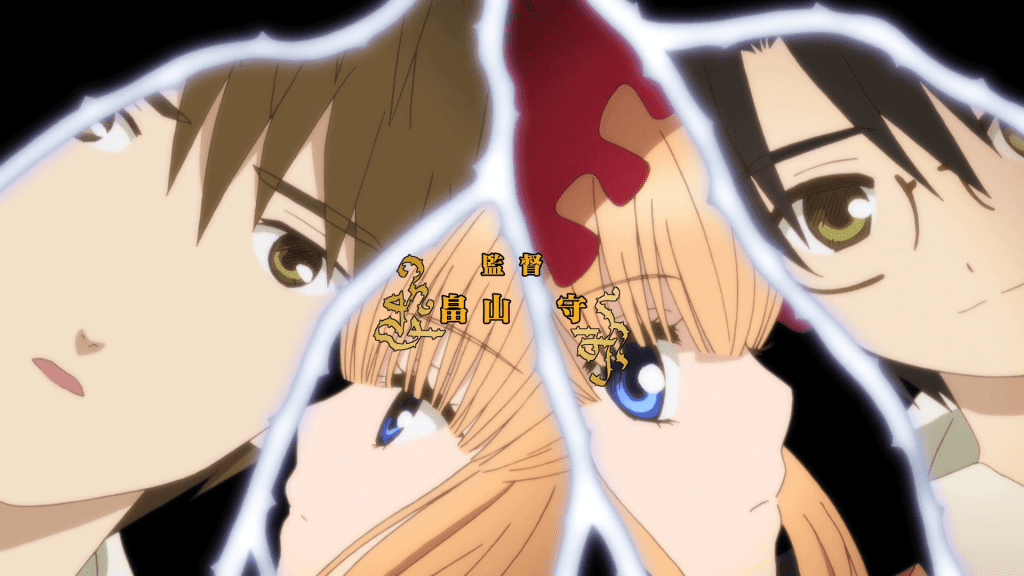 As the three opening sequences before, ALI PROJECT has once again to provide a new opening sequence titled Watashi no Bara wo Haminazai. Coming with all the nostalgia it brings of previous sequences, it brings one of their usual darker yet fast-paced songs with some great animation that overall had me pumped up for the episode that lay ahead. The ending sequence titled Alternative by Annabel also brought back the similar style of music from previous anime sequences with some simple but still nice animation. The remainder of the music in this episode is unique to this season alone, and while subtle complimented the scenes well.

In the end however, it is far too early to tell how this season will go especially given this is just a rushed recap episodes of far too many manga volumes. It has the foundations of a series I would definitely consider following, and I look forward to seeing what sort of direction they take the “Not Wound” Jun plotline…. as this is pretty much unread territory for me. Unfortunately as I don’t write Episode by Episode reviews anymore, my overall thoughts for Rozen Maiden Zurückspulen will have to wait until a review of either a DVD or Blu-ray release. With any luck this won’t take years and years as it was for Rozen Maiden Ouverture. 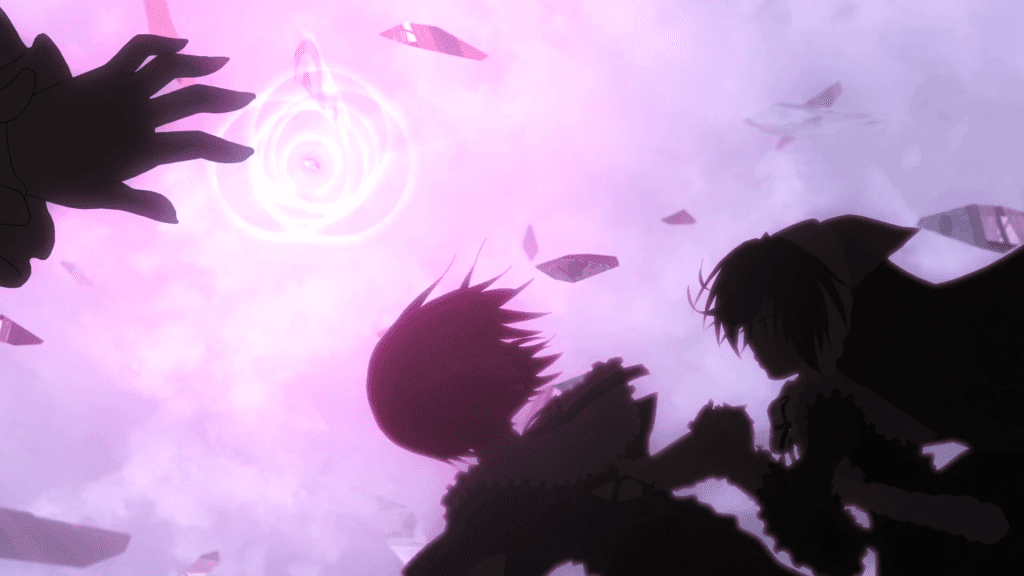 Rozen Maiden Zurückspulen, also referred to on other sites as simply Rozen Maiden or Rozen Maiden (2013) is now available for viewing for premium subscribers of the Crunchyroll service. Free members will be able to view it a week from launch.