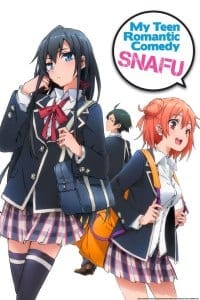 As part of their panel during Supanova Gold Coast 2013, Australian anime publisher Madman Entertainment announced amongst other titles that they had acquired the rights to My Teen Romantic Comedy SNAFU (Which you may also know as Yahari Ore no Seishun Love Come wa Machigatteiru | やはり俺の青春ラブコメはまちがっている).

As it has only begun airing in Japan we are well off a physical media release, so instead Madman Entertainment will be screening episodes of the series every Thursday with the first episode going live today (Ignoring the fact that this is a Friday). From the sounds of a press release made by North American licensor Sentai Filmworks, the series will eventually be joining the small subset of physical releases made by Madman which are subtitled-only.

So exactly what’s going to happen when Hachiman Hikigaya, an isolated high school student with no friends, no interest in making any and a belief that everyone else’s supposedly great high school experiences are either delusions or outright lies, is coerced by a well meaning faculty member into joining the one member “Services Club” run by Yukino Yukinoshita, who’s smart, attractive and generally considers everyone in her school to be her complete inferior?

But wait, we haven’t added the third caustic ingredient yet!  Meet Yui Yuigahama, who’s cute, bright, cheerful and apparently needs the service club’s help to bake cookies.  Is this a recipe for romance or will the end product be poison gas or a nuclear meltdown?  Will there be cookies, nookie or a reason for everyone to play hooky?  Get ready for romantic comedy gone totally wrong as the barrage à trois of the Service Club is unleashed on the unsuspecting student body in MY TEEN ROMANTIC COMEDY ~ SNAFU!