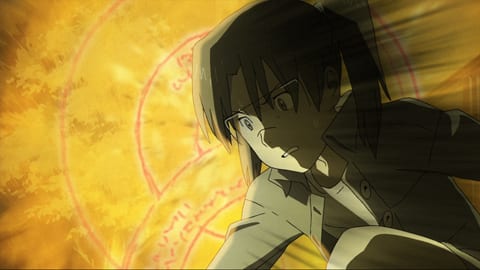 Rather than hand out Best of 2011 for every category imaginable last year, on The Otaku’s Study only a couple of titles walked away with the “Best Something of 2011” title. One of these was the Australian Anime Release of the Year – pooling together all the titles I reviewed over the year by Madman Entertainment and Siren Visual… and as you may expect have one walk away with the top spot.

This title was Dennou Coil, an Australian-exclusive English-subtitled anime release which I thought was very original and enjoyable. While released last year in two separate collections, come the 6th December 2012 you will be able to pick up the Complete Box Set containing all the episodes and a lot of bonus on-disc extras for $79.95. To check out my reviews of the series, click HERE and HERE.

Dennou Coil (aka: Coil – A Circle of Children) is an Anime First sci-fi series animated by studio Madhouse and made it’s original run on Japanese television in 2007.

Dennou Coil is set in the fictional Japanese town of Daikoku, the testing ground for an Augmented Reality project that involves crafting a cyberspace that overlaps the entire town. By using specific glasses, people are able to interact with this overlapping cyberspace, allowing them to carry on with their normal lives in addition to being permanently connected to the internet through their glasses, essentially concentrating all modern portable media devices (phones, MP3 players, Laptops) into one set of non-intrusive glasses. With the appearance of ‘glitches’ in this augmented reality, a thriving hacker culture soon emerges amongst the children of the city.

Dennou Coil tells the story of Yasako, a girl who moves to Daikoku together with her mother and little sister Kyoko with her virtual pet Densuke (an augmented reality dog that only people with glasses can see). Upon arriving in the town, she finds herself intergrated into the glasses community of the local children, and discovers that her shrewd grandmother has become a focal point for a major club of these children, called the Coil Cyberinvestigation Agency. This leads to later encounters with the enigmatic Isako, a girl with abnormally powerful hacking skills who seems to be hunting for computer viruses in the system known as “illegals”.