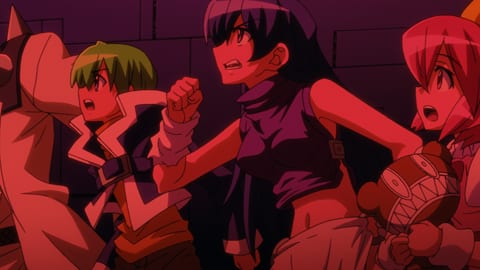 Siren Visual also have another December 2012 Complete Series release up their sleeves – recently opening pre-orders for the Needless Complete Series Box Set. This set follows on from two collections released last year which I reviewed HERE and HERE.

All of the Earth’s cities became targets of bombings and were bathed in frightful red flames. Half a century has passed since then. The contaminated former epicenter is still isolated from the city of Tokyo creating a hole in the middle of Japan commonly known as the Black Spot.

As time passed, people began to inhabit this wasteland. They were deemed unnecessary by those who lived in cities. Among these people were the ones who could command strange abilities – fire, wind, gravity… they had the ability to control these supernatural powers. Thus, those who possessed Fragments were regarded as… THE NEEDLESS!