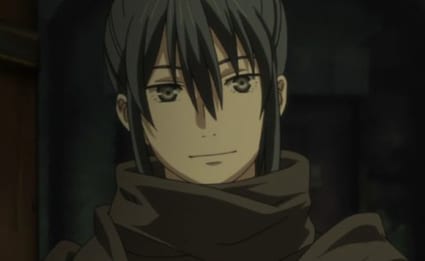 Siren Visual previously mentioned on their website that they would be releasing complete series box sets of Needless and their Australian-exclusive release of Dennou Coil. But what if you already own these? Will it be another month until you will have to wait for another release?…. Nope!

The company recently opened pre-orders for the anime series Number 6, which they intend to also release on the 6th December 2012 for $49.95 AUD. Via their Facebook page, they have also confirmed that one lucky person who pre-orders the title will receive the official CD soundtrack.

In 2013, after the great war devastated the world, six city states remain, created by The Babylon Treaty. Sion is a boy assessed as having the “highest-ranked intelligence” at age 2, allowing him access to the luxurious “Cronos” living area. On his 12th birthday, he meets a troublesome boy called Nezumi, who has just escaped from a reformatory and on the run from the authorities.

As punishment for harbouring a fugitive, the Public Security Bureau strips Sion of all his privileges, resulting in expulsion from “Cronos”. After four years of banishment, Sion and Nezumi meet again, resulting in the revelation of the secrets and mystery behind the city No.6.