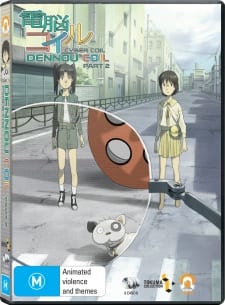 Having recently awarded this series my Australian Anime Release of the Year 2011, I am questioning whether I really needed to give this second part a review given to me the series as a whole beat the many other series released in Australia last year, however I am sure there are many on the fence or still curious about the second part so I hope this review eases your worries. Dennou Coil is an anime series that was in high demand over the last few years with no anime company willing to pick it up – until Siren Visual who over the year boldly released many other underappreciated series such as Welcome to Irabu’s Office picked the title up and converted it into one of their Aussie exclusive anime titles. While this does mean that there is no potential for an English dub at the time, it is hard not to fall in love with the characters, very detailed plot and the entire atmosphere created by the team working on this series. Are you ready to journey into the urban legends of the internet world? Please read on for my review of Dennou Coil Part 2 by Siren Visual. 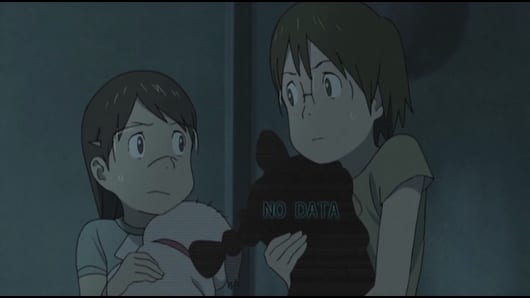 Imagine if the internet was ‘projected’ over the living world and you interacted with it using a portable device – glasses and visors which connect you to an augmented reality. In 2026, this technology becomes reality. Yuko Okonogi moves with her family to Daikoku, home of an ever expanding tech network which makes up the interactive virtual world. Her grandmother runs an agency to investigate missing children who appear to have vanished from the ‘real’ world and entered the city’s Dennou – literally meaning ‘electronic brain’ – a term used to differentiate between the virtual and ‘real’. A hacker culture is emerging amongst the children of the city. Yasako is soon introduced to Isako, whose powers for hunting computer viruses known as ‘illegals’ belie an agenda that might have sinister motives.

For those who have previously watched the first part and have not watched it recently, I would strongly advise before diving into this part to reacquaint yourself with the plot and the key elements to it, as while there are recap episodes included – the second part jumps straight into the more serious plot without being merciful if you happened to forget some of the things surrounding the story. I myself dived into a couple of episodes then chose to watch all the episodes (From 1 – 26) over the course of three days and I feel that I understood the plot a lot better than if I just jumped straight into the action. 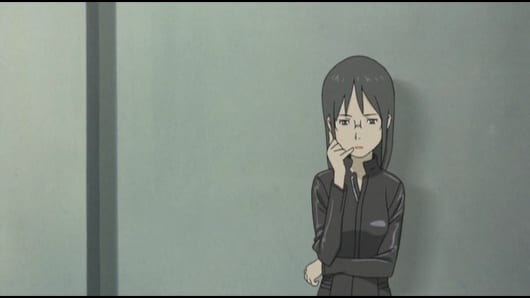 Continuing on from the last part, every episode presents itself as a little urban legend, rumour or folk tale which becomes the basis for the episodes plot in most cases. For example, after Episode 14 which is a much needed recap episode, the next episode has the opening narration of “According to rumors among children on the other side of the station, it appears that in the deepest part of old space lives a dangerous illegal” which becomes the basis for Yasako deciding to begin the animes main plot by searching for just who the mysterious 4423 boy she met five years ago was and why he keeps mysteriously appearing in conversation and dreams. As I believe I mentioned in the first review, while some might constitute it as spoiling the plot of the episode, I feel it is a creative way to keep the intended futuristic rural feel that they try to get across by mixing urban legends and such amongst the futuristic city that is filled with junk data and bugs, which as you will learn poses more risks than benefits in some cases. Driven by their own goals, the three main child characters Yasako, Isako and Haraken get drawn to the “other side” which is also referred to now as the “Coil Domain”, some intentionally and others to rescue those that have been taken by illegals and face trouble when their real and cyber bodies become “desynchronised”. With different characters holding their own agenda and characters real intentions not entirely clear, the outcomes are unpredictable for the most part and it was good to see they didn’t necessarily choose the ultimate happy end.

I will give that the storyline is implausible in some respects and perhaps a bit ambitious, but I could not help but become captivated by the world created by the writing team and they cleverly chose emotions that might not have necessarily matched the characters original personality but instead showed a new side to the characters you would not have expected to see. As well, despite the considerably large character cast, they chose to keep many of them only as secondary characters and use them as needed – which on one hand meant they dropped potential plotlines for some interesting characters but at the same time were not forced to ruin the main plot by including pointless filler episodes to include them. In the end, it was essentially half a series of one continuous plot of children risking their lives in order to save each other from the threat of the illegals, Searchmaton and the mysterious illegal Michiko-san. I can stay here rambling on about various aspects trying not to spoil the plot, but I feel it would be better picking it up and watching for yourself. In the end, the two main characters Yasako and Isako both recieved some creative character development that was not ruined by an overly optimistic outcome, with Haraken and Tamako also getting a sufficient level of detail.

I am more than happy to say that overall, I am still supportive of my decision to name this my Australian Anime Release of the Year 2011 and the plot was as if not more interesting than the previous installment. Although for those who want fast-paced action or comedic scenes, be warned that while they are both present, it is limited and not to the same degree as most other series or even Part 1 for that matter. 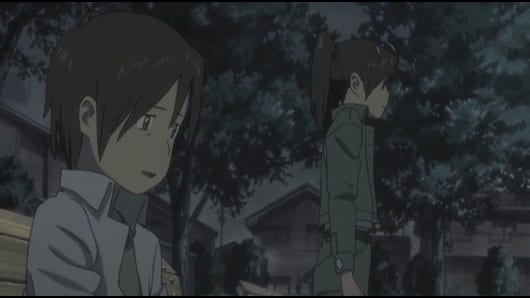 As this is the second part of the season, most of my comments relating to design and sound still hold true in this review. For the full summary of both, please read my review of Part 1 HERE. While I do question some of the more ambitious storyline-related designs such as the normal looking elementary school on the top of a skyscraper, they managed to present a clear and concise view about what they wanted the Coil Domain to look like, keeping it in the style of a fragmented old town while including features to keep both a fantasy world of imagination as well as a picturesque world when the plot demands it. The quality also seemed to improve as the episodes continued, often including more special effects and animations to support the more intense situations. I noticed in terms of music that they chose to repeat the same track several times over the course of two late in the series episodes which while still contributing to the mood evidenced they could have used a more diverse soundtrack – however as mentioned in my earlier review the quality is still there.

For those who love bonus content in their anime DVD sets and perhaps haven’t been satisfied with the normal offering of trailers and the occasional opening and closing theme most Siren Visual releases seem to include… you are in for a treat when you open up the set as alongside the obligatory and beautifully designed slipcase, you are treated with a bonus disc which is filled with extra goodies. The extras included in the second Dennou Coil set include:

This is without a doubt the best offering of bonus content I have seen for a fair while in terms of anime releases. Evidently, considering this is one of Siren Visuals exclusive series they have gone all out and produced a brilliant extras disc. 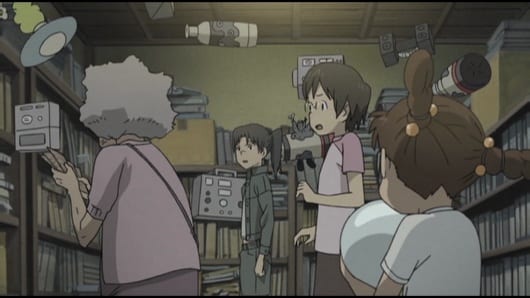 Without a doubt this is one of the overlooked and perhaps underappreciated anime series that has been produced, however I would like to applaud Siren Visual for taking the initiative making this one of the series they shall be remembered for. Dennou Coil succeeds as a sci-fi series and succeeds as an anime as a whole and I can happily recommend it to anyone who is after something a bit different from the norm to watch. In the end, it produced not only an intriguing storyline through the main plot – but interesting characters, a fair few tearful moments and several laughs through the first half with the epic beard wars being a personal highlight of the series.