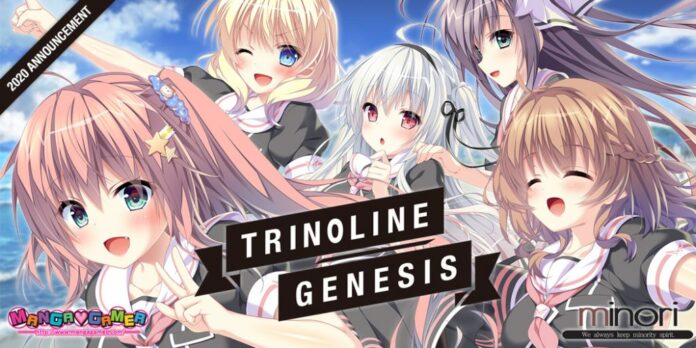 Following their 2019 all-ages and 18+ release of minori’s visual novel Trinoline, MangaGamer will be releasing its 18+ exclusive fandisc, Trinoline Genesis, via their online store starting 20 January 2022. For those who already know they wish to add this VN to their collection, pre-orders can now be made via the official MangaGamer Online Store.

The collection is available for $29.95 USD, although there is a small discount during the pre-order period, bringing its price down to $25.45 USD. Like other minori visual novels officially released in English, there is mosaic censorship within the sexual CG artwork, and all characters (excluding the main character) has voice acting. Haven’t experienced Trinoline yet? You can purchase the 18+ version of the visual novel HERE.

More information on Trinoline and its Trinoline Genesis fandisc can be viewed below.

From minori, the creators of eden*, Supipara, and ef – a fairy tale of the two, comes a brand-new heart-wrenching, sci-fi tale of an everlasting android faced with the mortality of mankind.

When tragedy leads to the advancement of science and the development of a sentient android indistinguishable from humans, what does it mean to be human or android? Is it possible for man to love machine, or machine to love man? Is such a love even real or nothing more than a series of numbers? Can there ever be a future where such love may flourish, or is it destined for heartache?

A true treat for Trinoline fans! Trinoline Genesis features all-new stories for the original three heroines──Sara, SHIRONE, and Yuuri──and adds two brand-new routes for the sub-heroines of the original game──Ayaka and Hanako!