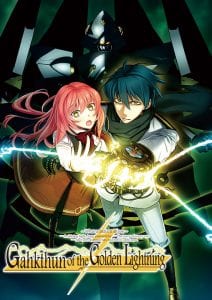 Getting in one final release before the year’s end, international visual novel publisher MangaGamer have released Gahkthun of the Golden Lightning onto their official online store. This visual novel was initially developed by Japanese studio LiarSoft under the title Ourai no Gahkthun ~What a Shining Braves~ (黄雷のガクトゥーン～What a shining braves～).

Currently priced at $44.95, Gahkthun of the Golden Lightning is an 18+ title which features Japanese voice acting and what MangaGamer have called “Mild Nudity”. You can find a sample of this VN’s CG artwork (Provided by MangaGamer) at the bottom of this post.

The year is 1908. The 20th century is still young. An unfamiliar 20th century – in an unfamiliar world. This is a world that experienced a 19th century very different from our own. A world filled with innumerable steam-powered Engines.  The unnaturally rapid development of this steam civilization has left the world’s skies shrouded in grey… and its seas dyed in shades of black.

“Sea” – Once, the word suggested an expanse of blue. Today, it refers to something dark and putrid. The former harbor city of Marseille in the European Kingdom of France looks out on a sea as black as any other. But these particular waters are home to something that can’t be found anywhere else on Earth… A massive artificial island, solid and imposing as a fortress. A city in its own right, but also a school; a place bursting with life and color. Its formal name: The Marseille Offshore Academia.

The Academia – a city founded on cutting-edge engine science; an academy designed to produce the greatest Erudite Scholars in the world. It stands above a sea fouled by the flourishing of modern civilization. It sits below a sky polluted by the emissions of countless Engines. And nonetheless, it shines like a jewel, filled with the radiance of students glorying in their youth. This is a place so overflowing with energy as to recall the long-lost sun. A place that glitters with a beauty reminiscent of the long-lost stars.

However, the Academia is also a city with a secret. Beneath its facade hides a darkness feared even by the French monarchy. Specifically… the school lies under the control of the “English West India Company,” a secret society that rules Europe’s underworld with an iron first. Not even the agencies of the great European powers could expose the Academia’s true nature; powerless to interfere, heads of mighty states can only watch warily for some sign that might reveal the Society’s intentions.

The Academia – a gorgeous island closed off completely to the outside world. A school that no student is permitted to leave, except as successful “graduates.” A society of the young and for the young, self-sufficient and proudly independent. A city-state under the absolute rule of the “Governing Council,” an elite body composed of the “Fraternity” and “Sorority”… and a subordinate branch of the English West India Company. A radiant distortion in the fabric of the world, continually producing both brilliant young talent and fearsome supernatural Arts. A carefully-cultivated, absolutely impenetrable garden of secrets.

However, in the spring of 1908… A single young man appears within its walls. After declaring his intent to wage war against the Governing Council, he introduces himself in this way: “Nikola Tesla. 72 years old. I’m a transfer student.” “Students of the Marseille Offshore Academia. My hundred thousand young friends, cursed by fate.” “…I will save every last one of you with my own two hands.”

And at the summit of Château d’If, a bell rings out.
The Bell of Gahkthun, announcing that the time of rejoicing is at hand…