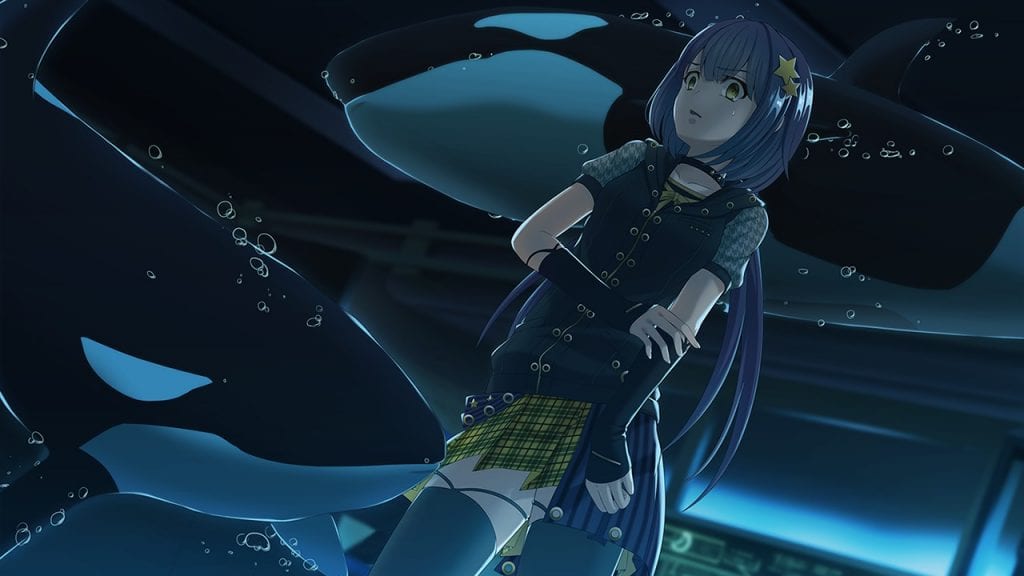 Providing another all-ages friendly visual novel experience via the Steam store, Sekai Project have announced that the English localised release of AiueoKompany’s horror/mystery themed VN Sound of Drop – fall into poison – is now available for purchase via the digital distribution platform. Not excluding any of the three major operating systems, Sound of Drop – fall into poison – supports Windows PC, Mac and Linux devices.

Step inside the Manten Aquarium, a place filled with breathtaking underwater exhibits and majestic creatures from the depths of the ocean. Mayumi Nakanobe tries to forget her history with the aquarium; it is where her little sister, Mari mysteriously disappeared from on a family visit over 5 years ago. Now Mayumi is being dragged back by her classmate and best friend, Himeno Tamagawa. Himeno is hell-bent on exploring the aquarium on the night of a full moon to find out if there is any truth to the blood-curdling urban legends and mysteries that have been surfacing over the last several years. Mayumi wants nothing more than to keep her memories of the aquarium suppressed, but as the two friends begin exploring, Mayumi catches a glimpse of the impossible… she sees her sister, Mari. Leaving Himeno behind, Mayumi chases after her sister into the dark halls of the aquarium, blind to the horrors that await her.

Things are certainly not what they appear to be inside the Manten Aquarium. Playing as Mayumi Nakanobe, players will be forced into a labyrinth of underwater nightmares where a sea of life or death choices await them. Are the rumors and urban legends true? Will Mayumi reunite with her little sister who vanished inside the depths of the aquarium 5 years ago? Will she be able to join back up with Himeno before it is too late, or has her friend’s fate already been sealed by the mysteries of the aquarium? What, or who is behind all of this? Find out in Sound of Drop – fall into poison –.

The Steam release of Sound of Drop – Fall Into Poison – features a number of new features compared to their earlier releases. AiueoKompany have included two new “True End” scenarios (for a total of four), and a slew of new “Bad End” scenarios, with a total of 27 on offer. Also introduced is added polish to the artwork/scenarios, new event CG’s, new scenes, new BGM, an opening movie, Steam Trading Cards and a new character by the name Miku Minato.

Sound of Drop – Fall Into Poison – is currently available via Steam at a regular retail price of $12.99 USD. For a limited time post launch however, they are taking 20% off the price, and early purchases can nab this visual novel for $10.39 USD.