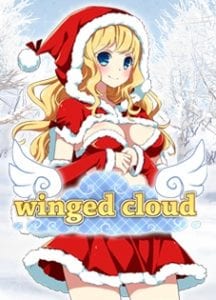 In a recent announcement by the international visual novel publisher, MangaGamer have confirmed a new partnership with the English development team Winged Cloud. Winged Cloud are the creators of the Sakura series on Steam, and will be bringing two new titles for release on both the MangaGamer website and Steam.

The first title is Sakura Santa, an all-ages title focusing on Christmas and holiday romances. Given that its release will coincide with the Christmas season, pre-orders for this title are now open. More information on Sakura Santa can be found at the bottom of this post.

The second title is Sakura Dungeon, which will tell the tale of a knight and foxgirl as they work together to clear a dungeon full of monsters. This Sakura game will feature a combat system “packed full of skills, strategy, and cute monster girls to recruit into your party”. Sakura Dungeon is slated for a Q1 2016 release.

Finally, MangaGamer have also confirmed they will be releasing the uncensored, adult version of Winged Cloud’s Sakura Swim Club. This special “MG Edition” can now be purchased HERE.

We’re really excited about the prospects this new partnership holds for Winged Cloud and visual novels. Their games have always been well known for their artwork and their sexy situations, but we believe this partnership will help Winged Cloud explore their strong suits with less content restraints as they start challenging themselves in a new direction. We want to help nurture their development as they continue to grow.

Koji is feeling a bit down. This is the first Christmas he’s spending alone this year. Since he moved out of home to attend the university of his dreams, he has found life to be lonely. Feeling distraught, he wanders to his local shrine to make an offering. His wish is a simple one:
​
“I want to have someone to spend Christmas with this year.”
​
Shortly after making that wish, he meets three girls, all with unusual quirks. All of them want to spend time with him in the days leading up to Christmas, leaving Koji with quite the dilemma. Who should he spend Christmas with this year?