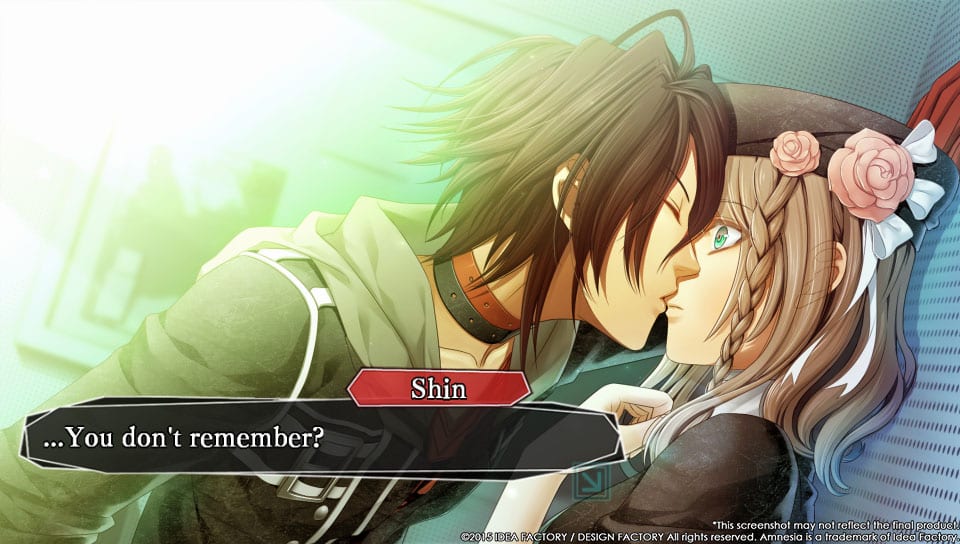 Idea Factory International have this morning shared their first batch of English localized screenshots for Amnesia: Memories, their very first visual novel work since opening their doors in 2013. To be published on the PlayStation Vita in August, this romantic VN will see you take on the role of a custom named heroine who suffers from Amnesia. Unlike many choice-driven romantic VN’s however, you get to choose your romantic path at the start, with each “world”offered corresponding to a different lover.

This batch of screenshots highlight the “world selection” section of Amnesia, alongside the Heart World (Shin’s Romantic Path) and the Diamond World (Toma’s Romantic Path). As those who have watched the anime adaptation already (Published by Sentai Filmworks in the US and Hanabee Entertainment in Australia), Shin and Toma are two guys with very different personalities.

Amnesia: Memories will be released on the PlayStation Vita in August 2015 as a digital exclusive title. This will be followed by a PC Steam release at a date “soon after”.

On the 1st of August, you awake as the Heroine, with previous memories of who you are somehow snatched away from you. In your confusion, a mysterious spirit named Orion appears to help you regain your memories. You’ll explore your own world as a complete stranger, trying to understand what was once familiar all while hiding your condition from the five men close to you. Because, as Orion warns, you may jeopardize any chance of recovering your memories if anyone finds out. It’s now up to you recover the past to rewrite your future love story!