After releasing Moonstone’s Imouto Paradise last year, visual novel publisher MangaGamer have announced that they will be bringing ‘Princess Evangile’ (プリンセスエヴァンジール) to the Western market later this year.

Unlike Imouto Paradise which has no conceivable means of being released in an all-ages format, Princess Evangile will be available as both an 18+ adult edition through the official MangaGamer online store and an all-ages edition through the online store and Steam. It is likely that the all-ages release will be based on the Japanese PlayStation Portable edition, while the naughtier adult edition will be based on Moonstone’s original 2011 release.

As with most adult visual novel releases outside of Japan, Princess Evangile will come with no mosaics over the “naughty bits”, and full Japanese voice acting. The adult edition will set readers back $44.95 while the all-ages edition will only cost $34.95.

More information on the visual novel can be found below: 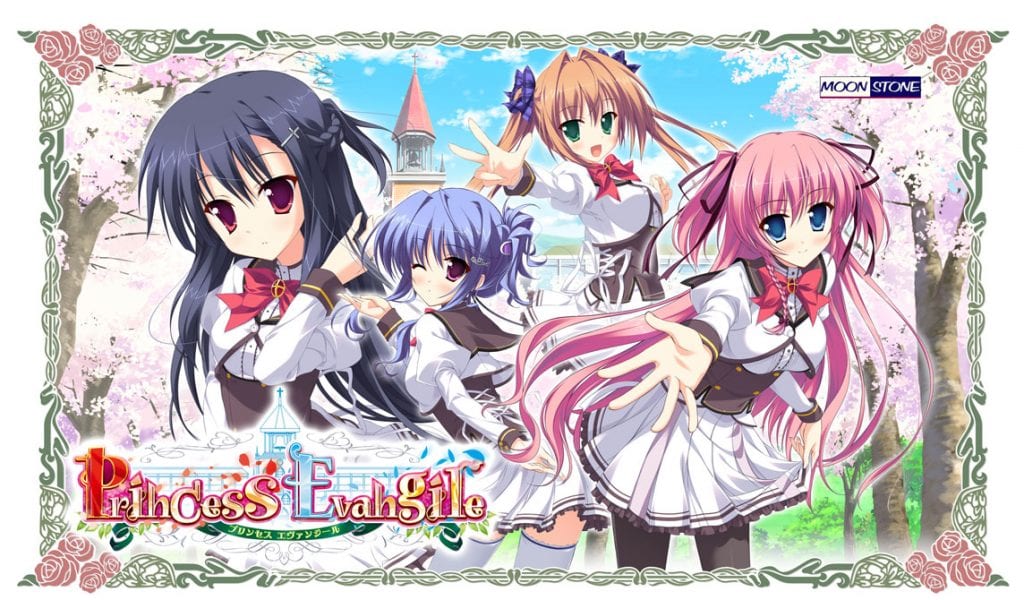 It’s a cold night in March. The protagonist wanders homeless through the city after getting stuck with an enormous debt from his good-for-nothing father. Suddenly, he spots a girl surrounded by hostile figures. A destined encounter… with Rousenin Rise. Before things get bad, he drive off the attackers and saves Rise.

His actions prove to Rise that he is a man of character, and so she tells him about her plan. She wants to enroll him in a locally famous charm school — Vincennes Private Girls’ Academy. The Vincennes board of directors has long been torn over the idea of “integrating” boys into the student body. After years of argument, the chairwoman (Rise’s grandmother) has declared them at an impasse. Instead, she decides, they will admit a single boy as a “sample,” to let the students decide for themselves if they want integration. The protagonist is admitted to Vincennes to serve as this sample. But…

There are two important organizations in Vincennes: the “White Lily” and the “Red Rose” societies. Rise is the leader of the White Lily society and means to use it to push for integration. But her fellow representatives refuse to take part, and quit the society instead. Vincennes’s board of directors may be split on integration, but the student body is 99% against it. Our hero’s future is in doubt. And there’s something else Rise has been keeping from him… In fact, he need to pass another trial in order to stay at the school at all… There’s going to be a vote. At the end of the first term, the whole student body will vote to decide whether he can stay or not. If he doesn’t pass, he’ll have to leave school before the year is even out!

Can the lone boy at an all-girls school get these innocent maidens — the Filles de la Vincennes — to accept him?!

Rise is a 2nd year student in Final Course and daughter of the chairwoman of the school board. She’s also the leader of the reform party — more precisely, she’s the only student in school in favor of reform at all.

Her title, ”Soleil D’Ecole,” means ”Sun of the School” and it shows. The girls of Vincennes fell in love with her at first sight. But despite her transcendent popularity, many find her difficult to approach due to her rather progressive ideals… In some ways, she really is like the sun.

When she meets the protagonist, she decides he’s the one she’s looking for and arranges his transfer. As she watches him, she decides she really does have good taste.

”Listen to me. It’s up to you to get them to accept reform.”

Ritsuko is a 1st year student in Final Course. Her title, ”Belle Epine,” means ”Beautiful Briar Rose.” It refers to both her great beauty and her aura of unapproachability.

Normally, 2nd year students are asked to head up the societies, but this year, it was Ritsuko who was chosen… This causes her great discomfort. She dislikes breaking rules and traditions. She is also violently opposed to reform — not because she hates men, but because she views it as a violation of tradition.

She herself neither likes nor dislikes boys. She simply doesn’t consider them relevant to her.But as head of the Red Rose society, she will fight to keep Vincennes the way it is. She’s Ayaka’s little sister, and ends up lecturing her from time to time, but clearly cares for her deep down.

”I will not accept. Neither changes to the school, nor you.”[/tab]
[tab title=”Kitamikado Ayaka”]

For one of the ”Maidens of Vincennes,” Ayaka has a surprisingly laid-back and fun-loving personality. But these quirks tend to lead to the other girls giving her the cold shoulder. Because of this, she doesn’t have a title, despite her great beauty and amazing figure. Instead, she’s simply known as ”The other Kitamikado.”

Her preferences lie on the side of reform, but since she’s graduating this year, she’s not that invested in it. She’s very interested in the protagonist, though, and teases him a lot as a way of getting closer to him. Her little sister Ritsuko lectures her from time to time, and although she brushes it off, deep down, she loves her sister very much.

Chiho is the protagonist’s childhood friend. After a year apart, they’re each surprised to find the other at Vincennes. Vincennes has three levels of schooling: Primary, Intermediate, and Final, and the students put a lot of stock in how early you entered the school.

Chiho entered during Final Course, and feels isolated as a result. She doesn’t have a title, and mostly tries hard to keep her head down. Of course, Chiho’s the kind of girl who would have been extremely popular if she’d entered in Primary Course… but she doesn’t seem to realize it.

She’s overjoyed to see the hero again, but at the same time, she’s extremely bitter. She seems to have some misconceptions about the time they spent apart…

”Forget all about our promise back then. Okay?!” [/tab]
[tab title=”Yanase Konomi”]

Konomi is a 3rd year student in Intermediary course. She thinks of Ritsuko and herself as ”sisters,” but Ritsuko doesn’t return her affections. (”Sisters” at Vincennes refers to a special closeness between two people). She burns in opposition to the protagonist, whom she views as a threat to her ”Onee-sama.” Because Ritsuko’s views are so conservative, Konomi can view the symbol of reform, the protagonist, as no less than an enemy to defeat! But if you set those matters aside, she seems to bear the protagonist no ill will.

Even so, she has no experience with boys, and she’s an extremely late bloomer, so she can’t even look him in the eye when they talk. She’s so shy that she can’t even pay attention during health classes. She believes that you can get pregnant by looking into a boy’s eyes for ten seconds. Her title ”Mignon Poupee” means ”Darling Doll,” but she’s exceedingly strong — in multiple senses of the word.

Ruriko is a 2nd year student in Final Course. A true lady, she is the sole heir to the international Kamiyagi Corporation. Rumors say that when she goes home during vacations, she can’t go outside without a bodyguard. Perhaps because of that upbringing, she sometimes seems ignorant about the wider world. Many of the girls at Vincennes are considered ”hothouse flowers,” but even among them, Ruriko appears shockingly sheltered.

Her good breeding makes her popular at school. Her title means ”Bijou Bleu” (Blue Gem). She helps anyone she meets indiscriminately, and even befriends Chiho despite her outcast status. She’s always with her pet, Panterbell.

”Masaya-san, you were my first…” (Translation: ”You’re the first boy I ever shook hands with”)[/tab]
[tab title=”Mekata Mitsuki”]

Mitsuki is a 2nd year student in Final Course. She and Rise used to be best friends, but lately, certain circumstances have forced them apart. Her title is Chef De Corps (captain of the guard). Her name comes from her ”sisterly” relationship with the student council president, Marika.

She’s a representative of the Red Rose society and would have been elected society leader, but pushed Ritsuko to take the title instead. Part of it is that she’s broad-minded enough to realize that, despite being younger, Ritsuko is more popular. It’s also an indicator of just how opposed she is to gender integration.

”I don’t want to have classes with you next year… you have to be joking.”[/tab]
[tab title=”Nogi Tamie”]

Tamie is a 2nd year student in Final Course and the news club’s ace reporter. Her life revolves around reporting on the goings on at school. She carries around her ”Holy trinity” — camera, microphone, and recorder — at all times.

Marika is a 3rd year student in Final Course, student council president, and La Toute Soeur (”Everyone’s big sister”) She’s considered the most beautiful and talented girl in school, and is insanely popular. In the last election, Marika ran unopposed — because all the other candidates fled in the face of her popularity.

She has a gentle personality, and is kind even to the school’s sole male student.

”So you’re Masaya-kun… *giggle* I look forward to our acquaintence.” [/tab]
[tab title=”Okonogi Masaya”]Masaya is the game’s protagonist, a 2nd year student in Final Course. He’s a fairly unlucky person whose good-for-nothing father stuck him with a huge debt. After a year on the lam (with his father) he’s come home to Tsurugigaoka. His parents divorced when he was a child, and he only sees his mother rarely.

After his father ran out on him and stuck him with his debt, he was completely at the end of his rope. It was then that he ran into Rise and his destiny found a turning point. He’s the subject of extreme caution from the girls of Vincennes, who have only been raised among other girls. However, he himself is a thoroughly pleasant young man. [/tab]
[/tabs]