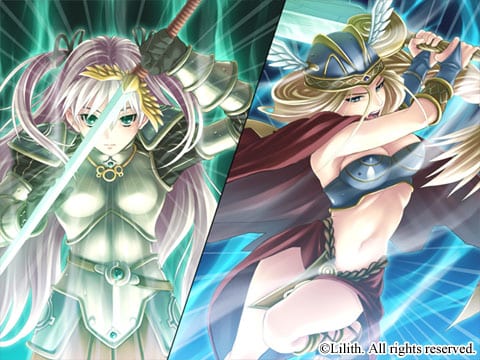 Following their digital download release of Lilith’s visual novel Valkyrie Svia (Ikusa Otome Suvia // 戦乙女スヴィア) in early-2014, MangaGamer have confirmed that they will be offering a hardcopy/physical release from next month. As with the digital release, this visual novel will come with no mosaics over naughty bits and Japanese voice acting for the female characters.

Priced at $24.95, pre-orders are currently being taken via the MangaGamer website. Copies will begin shipping out on February 2nd 2015.

The protagonist Loki, a divine being, joins forces with the jotnar and denizens of Hel and invades Asgard, the world where the gods dwell. Just when it seems he has the whole world in his hands, Odin, the chief of the divine, takes a life-threatening measure. He seals the mouth of the river that feeds Yggdrasil, the tree which supports the world, and compels his captors, “Release me if thou wishest not to perish with me.”

The withering of Yggdrasil means the end of the world. Our protagonist has fallen into a dilemma, but there are keys with which to break the seal on the gate. He discovers that those keys are still sealed within the virgin wombs of the battle maidens who continue to oppose him stubbornly: Svia and Sigurd.

“If we defile those maidens, the seal will be broken and we can retrieve the keys from their wombs!”
“We have a score to settle with those maidens! Let us jotnar and our clan rape her with our penises!”
“No, we Helians should be the ones to defile them with our depraved tentacles!”

By this order from Loki, a devious, evil trick is played on Svia and Sigurd. The last hopes of the divine, the battle maidens and heroes known as “Valkyries” are snuck up upon! 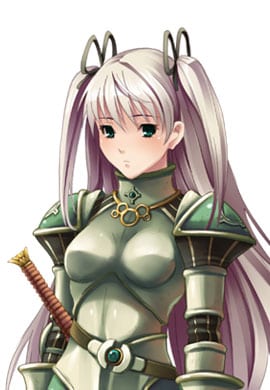 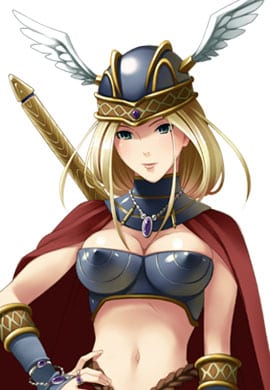 Clad in armor that shines emerald. Braided long hair and dark green eyes. Her features yet retain an innocence to them. She comes from a respectable pedigree of a family in Asgard. As a result of studying the sword and magic from a young age, her technique is second to none. Additionally, she educated herself diligently as a soldier, and her tactical planning is utterly top class.

However, her uncompassionate conduct and occasionally selfish actions have left her in a not-so-high position amongst the Valkyries (the soldier squadron of Valhalla). Still, she is among the strongest of Valkyries, and it is difficult to say whether she or Sigurd is stronger. She carries one of the keys to the floodgates of the River of Wisdom, whose water flows into the roots of Yggdrasil, within her womb.

A beautiful girl with golden hair and agate eyes, who wears a traditional azure battle uniform. She was originally human, not a divine, but her bravery and technique with a blade was evident on sight and she became a Valkyrie. On the opposite side of the spectrum from firm and strong-minded, her emotions run deep. She’s warm-hearted and displays ladylike care. She has a big-sister disposition to her, and boasts a befitting popularity amongst the soliders.

She handles a sword larger than she is as if it were light as a feather. In battle she’s a power fighter who takes the lead and mows down enemies in front of her. On the other hand, she also happens to have an intellectual side, and executes faithfully the strategies Svia comes up with without breaking a sweat. But as a Valkyrie, her human roots have left her at the lowest rank, and she was left behind on the march to rescue Odin to guard over Valhalla. As a result, when the Divine Forces were defeated, the troops she led became the final hope for Asgard.

She’s Svia’s only friend. Also, like Svia, she carries one of the keys to the floodgates within her womb.