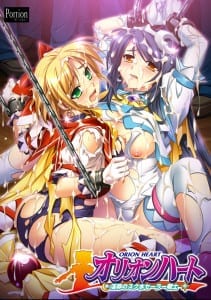 Back around July 2012, visual novel publisher MangaGamer announced that they had acquired the rights to Portion’s eroge title Orion Heart. Almost a year later, the company have announced the release of this title, which is now available for purchase via their online store. As you will be able to see from just the preview images below, you can expect your ordinary mix of eroge CG artwork alongside dialogue – and of course as with most of their localized releases this is decensored without mosaics.

This title is currently available for the price of $24.95 and features Japanese voice-overs with English dialogue.

A demon whom the two girls thought they had defeated returns to hunt them down!

Currently, Orion Suns lives in peace, letting the soft flames of love stir in her heart.
But soon, her nemesis Gildart returns to trample all over her innocent soul.
The boy she has feelings for becomes possessed by the demon, and he uses the body of the boy Orion Suns loves to crush her.

And so, in order to save the boy, two girls offer up their pure, innocent bodies to the demon…

An innocent, naive girl who can transform into Orion Suns.

After finishing her battle at the Black Castle, she started a new, peaceful life.

The beginnings of love begin to stir in her heart for her classmate, Osamu, and the demon Gildart aims to abuse this weakness.

Yuka falls victim to the demon’s vile plans as she tries to save Osamu, and her best friend Aoi shares the same fame.

She was watching the relationship bloom between Yuka and Osamu with warmth in her eyes, but never in her wildest dreams did she imagine that a demon was creeping between the two.

When she finally notices, it’s too late, and both she and Yuka fall into Gildart’s trap, corrupting their pure and innocent bodies as he pleases.