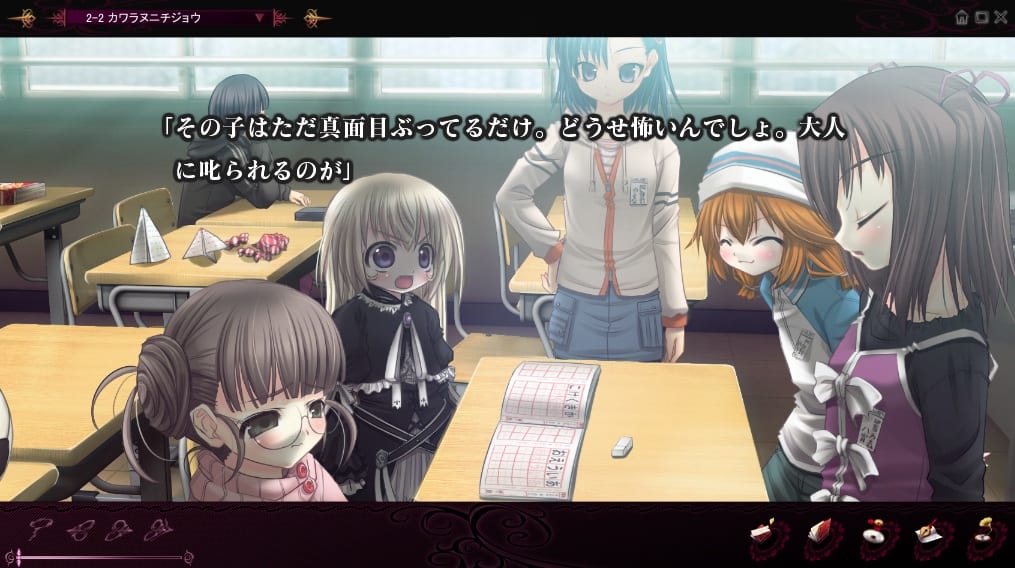 After mentioning the game for several months now, I have decided it would only be fair that after my review of Monobeno’s demo that I go ahead and review Gothic Delusion, Lose’s first title which showcases their unique ways of delivering the visual novel experience to its viewers. As I have mentioned before, the two main aspects that are of appeal in this games preference towards CG artwork over character portraits and that the game only includes optional eroge content (Which they actually expanded upon with free user-voted DLC). So what makes this visual novel so memorable to me? Read on and I shall tell you.

Looking at the game system, it was hard to get used to however after getting into the game you would find it to be a robust system that gives you access to all the essential menu options and shortcuts such as Auto and skip from anywhere in the middle of the main game, with no need to go through a series of clicks and menu options to change the setting you need. The only moment you would essentially need to quit to the main menu is if you wanted to view the extra eroge content or BGM sampler. You are given the option to go back to any part of the story through a drop-down list at the top of the screen. It isn’t anything overly unique in writing but it is a lot easier and nicer to use than most systems.

As hinted several times before, it is the design that makes it for this game, and was inevitably built upon in their upcoming release of Monobeno. Unlike other visual novels where you would see perhaps 90+% of the game making use of character portraits and the other whatever percent using a couple of CG artworks which can range anything from 10 to several dozen, Gothic Delusion uses CG artwork for almost their entire plot, all of which are high quality and well designed overall. There were a few moments that you could tell they used overlapping images, but this would only make up a small percentage of the game and I assume these were used in times where doing individual artwork would have been too tedious and pointless. They were creatively able to make out animated scenes through the use of CG artwork and the occasional special effect played over the top (Such as the one pictured above) which is something most would just use a video clip for – but turned out really effective.

Music was perhaps the star element in this series, holding what I would consider one of the great soundtracks of gaming with a whopping 76 (Mathematically calculated, not actually counted) tracks used and offering a diverse variety of instrumental and lyrical tracks to suit the moods they were trying to put across. The games opening theme is Lunatic Delusion performed by nao with music by Team-OZ and was fast paced and simply put… “awesome”. Another of the games other lyrical tracks was 月槍 performed by OZ, which was used in the games demo trailer HERE and was also well performed. The instrumental tracks in the game were diverse and well adapted to the ever changing moods of this visual novel, loaning itself to both the more serious moments and those which are all about the supernatural battles. 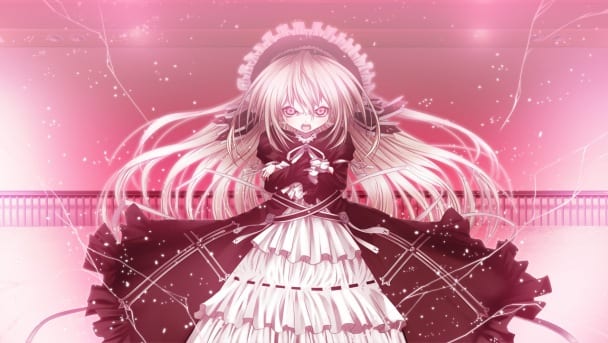 In terms of characters, the game has a total of 18 characters with varying degrees of important from the main characters Takamichi Fukazaki (Male Protagonist who ACTUALLY appears in the CG artwork frequently) and Lo (Female protagonist), to Fukazaki’s students who may only have a couple of lines in the game max. While there is a little bit of overlap of voice talent between characters, most of the cast are voiced by unique voice actors and actresses, overall doing a pretty good job at putting across the emotions of the plot. In terms of the actual storyline, it was overall a solid tale however was much shorter than I was expecting, which unlike others I have watched lately, only lasted a handful of hours despite the many chapters. I just wish it built more upon the darker side to the story, as the first and final chapters to the title were the most interesting both plot-wise and visually to me.

In terms of how this game was reviewed, the storyline was run through once, while none of the eroge content was viewed.

However this release was not flawless, with a couple of issues. First of all, while the designs are brilliant – you are more or less stuck to the games 1024 X 576 screen resolution as anything higher resulted in the artwork being blurred considerably despite the higher screen resolutions available (1600×900 was the maximum offered to me). Also, due to the way the games system has been designed – it does not run very well on below average computers and is more prone to lagging on them than most visual novel releases. 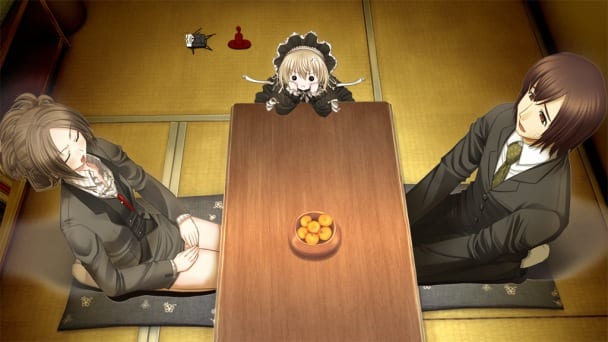 I think this is a creatively designed visual novel, and goes to show how a company set to release visual novels can really go out of their way to ensure their title gets noticed… a short but sweet storyline, an impressive soundtrack, great designs with a rather unique idea and of course a good visual novel system to boot.

Note, as with all my reviews of Japanese-language titles are, storyline is not taken into account (Making this a review on appearance than plot)…. I strongly suggest reading the content of the review as well as the plot summary below to make up your own mind on if it will appeal to you.

About “The Search For the Perfect Visual Novel System”
Reviews done under this header are not so much about reviewing the game as they are detailing the visual novel system within it. While a few years ago visual novels were not as big a thing in the English gaming market, we now have some companies distributing such titles to our market of varying ages (From the older ones such as Deus Machina Demonbane to newer ones such as My Girlfriend is the Princess). These reviews is a multi-part thing I hope to continue with, covering both new systems such as Monobeno’s to older but more unique systems such as 07th Expansion’s Sound Novel systems. While I own titles such as Umineko and Higurashi, those of Japanese titles will be based off free demo releases. This might not even just be covering your normal “visual novel” type games, but also those within RPG’s etc as more developers move to utilize this style of presenting dialogue.

About Gothic Delusion
One moonlit night, new teacher Takamichi has a trick played on him on his way home by a girl Lo who says she is not a human and had been looking for him. It seems that she was being chased by someone. He thought that her claims were totally absurd, but not wanting to leave her alone in the middle of the night, decided to take her to the nearest koban.