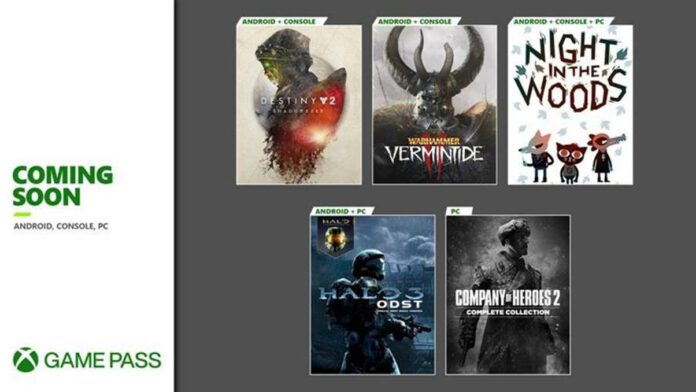 Whether you are still being required to self-isolate or just feel like having a lazy, relaxing day on the couch, the Xbox Game Pass serves as an affordable option to bring a lot of memorable gaming experiences into your living room without breaking the bank. In the latter half of this month, subscribers to the service on either the Xbox One, Windows PC, or (from this month) Android platforms will gain access to up to five new games , although will lose access to six.

You can read more about all the comings and goings on Microsoft’s digital subscription service below:

New to the Xbox Game Pass

Company of Heroes 2 is an acclaimed blend of strategy and tactics will test players’ knowledge of real-world combat. Now with five armies included to play with in multiplayer and two single-player campaigns. Cover, line of sight, armour, and fully destructible environments all must be considered to lead your troops to victory.

Dive into the world of Destiny 2 to experience responsive first-person shooter combat filled with stylish finishers and devastating Super abilities. Create your Guardian and explore the mysteries of the solar system while collecting powerful gear to customize your look and playstyle. Brave challenging co-op missions, compete with other Guardians in a variety of PvP modes, and experience a cinematic sci-fi story throughout both the Forsaken and Shadowkeep expansions. You decide your legend.

Play as an Orbital Drop Shock Trooper (ODST) and explore the war-ravaged streets of New Mombasa as you attempt to piece together the Covenant’s motivations for invading the city. As an ODST, you don’t have the firepower or the overshields to go head-to-head with Elites, Brutes, and Hunters – so use stealth and hit-and-run tactics to eliminate threats and sneak behind enemy lines.

That’s not all though, as ODST Firefight is joining The Master Chief Collection on console and PC for the first time, with online matchmaking, dedicated servers, and new custom game modes! Grab some friends and hop into the fan-favorite mode as you take out wave after wave of Covenant invaders across 10 legacy maps.

Night in the Woods
Available from 24 September 2020 – Android, Xbox One, PC

Join college dropout Mae Borowski as she returns home to the crumbling former mining town of Possum Springs, seeking to resume her aimless former life and reconnect with the friends she left behind. But things aren’t the same. Home seems different now and her friends have grown and changed. Leaves are falling and the wind is growing colder. Strange things are happening as the light fades.

Warhammer: Vermintide 2
Available from 24 September 2020 – Android and Xbox One

Sequel to the critically acclaimed Warhammer: End Times – Vermintide. Fight together with your friends against the forces of Chaos and Skaven in this epic 4-player co-op game set in the Warhammer Fantasy Battles world. Vermintide 2 expands the intense first-person combat with a brand-new enemy faction, 15 new career paths, talent trees, new weapons, an improved loot system, and more.

With the addition of games to the service, comes the removal of six on 30 September 2020. These include: Bad North, DiRT Rally 2.0, Dishonored 2, Panzer Dragoon Orta, Westerado: Double Barreled and Yooka-Laylee. Be sure to play them while you can, or otherwise purchase them outright at a discount of 20%.