Although it is not an entirely new concept in the video game industry, virtual reality gaming continues to be a growing section of the market, with a handful of different platforms now available for purchase. A major deterrent in my opinion is that a lot of the main VR platforms are not cheap options, not only costing more than $800.00 AUD for the base unit (Not always including some beneficial accessories), but also a PC powerful enough to guarantee you won’t experience any jerkiness while playing.

Entering the virtual reality market in the last month has been Sony Interactive Entertainment, with their mid-price range PlayStation VR unit. While it may not have the support of many PC games which have virtual reality support (either officially or through mods), it does come with its own library of exclusive and multiplatform games. More notable however is that, since it makes use of the PlayStation 4 which has pretty much standard specs between units, there should be a lot more consistency with frame rates and quality.

As the first of the three major home video game console companies to release a virtual reality headset… how has Sony Interactive Entertainment fared?

The install process for the PlayStation VR isn’t all that time-consuming, and you can get it hooked up to your PlayStation 4 within five minutes. But time-consumption and complexity are two different things, and this wasn’t the easiest thing to install. I highly recommend you take the time to follow the guide which is included in-box, as there are a lot of cables and a processor box you need to hook up. While I am sure some people have found tricks to keep things neater, the end product in my circumstance was a messy assortment of cables everywhere around my PlayStation 4 – with the PS4, PS VR headset, processor unit and PS Camera all needing cables to connect them to one another and/or a power source.

Fortunately, once you have everything plugged in and working, the actual on-console install process is simple. This second stage of the installation from my perspective is more about helping you get the device on your head and providing the essentials you will need to use it. If the PlayStation VR is being used by more than one person, the same install screens will appear for each user account on the console. 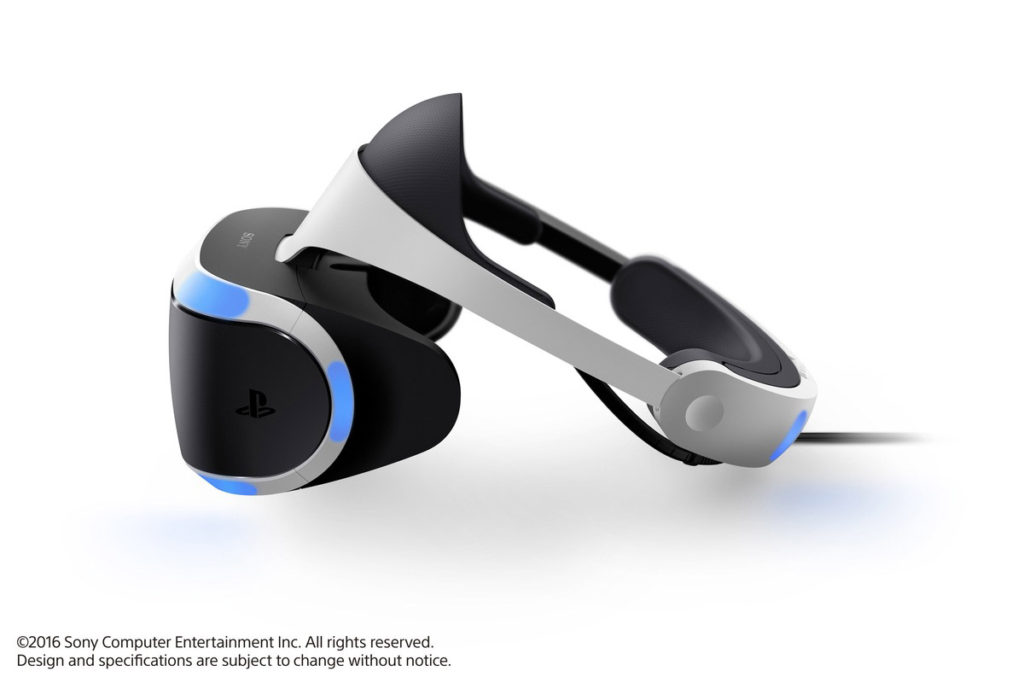 While the PlayStation VR does mean a lot more cables around your gaming area, the device itself is very modern and chic. As a slightly cheaper option for virtual reality, it doesn’t feel tacky, and in my opinion maintains the standards of build quality I have come to expect from Sony Interactive Entertainment over the years.

While first impressions may leave you thinking that the PlayStation VR is large and bulky, it is very comfortable to wear, even for longer periods of time. From my experience, I have played two hours of EVE: Valkyrie (Which requires a lot of neck movement), and I felt no notable strain on my neck. This is from my own experience however, and I highly encourage you to be cautious when using the PlayStation VR – as everyone’s physiology can be different.

One important aspect about having an immersive experience is ensuring that you have no external light sources flooding from corners of the headset. The PlayStation VR attempts to mitigate this by using a black plastic material surrounding the headset, which has been dubbed the “Scope”. I have had several people try my unit, and there seemed to be mixed results, even after tightening the headset to comfortable levels. While I have ended up with almost no external light, others have mentioned a more notable amount when playing. If you are in the latter group, it may be best to play in a darker room.

One of the greatest aspects of virtual reality gaming is that you can feel immersed in the game you are playing. In EVE: Valkyrie for example, it does visually give you the impression you are flying through space in the cockpit of a space fighter. Alternatively, in Until Dawn: Rush of Blood, things are made a lot more eerie by feeling like you are sitting in a haunted roller coaster ride. While the console, like its competitors, does generally tick the box in terms of potential experiences delivered – what about the quality?

What I will say is that you should not expect the same visual fidelity you would find on a high-definition television. The 5.7″ OLED screen containing within the unit provides a 1080p display resolution with a 100 degree field of view. Therefore, its specs are good but not particularly notable, especially with some of its competition offering slightly better resolutions. The PlayStation 4 and PlayStation VR processor also manages to maintain an almost consistently stable frame/refresh rate from my perspective, lowering the risk of nausea or a headache due to experiencing unnatural lag.

While it is still early days for the PlayStation VR and virtual reality gaming in general, you should not expect the same level of visual fidelity compared to a high-definition television. The visual quality is decent, and for general virtual reality gaming, what’s presented is more than adequate. However, especially when dealing with on-screen text or anything to be viewed either at a close distance, there were occasions where everything felt slightly out-of-focus.

At launch, the PlayStation VR offers a decent assortment of games. These include titles developed exclusively for VR platforms (Such as EVE: Valkyrie), older titles which have been re-released with VR support (Such as Driveclub VR) and previously released games which have had supported added to it in some shape or form (Such as Hatsune Miku: Project Diva X). The currently available titles span a range of different genres and price points, and Sony Interactive Entertainment hope that first and third party developers will offer at least 50 games on the platform by the end of 2016.

Given you are spending hundreds of dollars on this peripheral, I imagine you would already be considering at least a few games to purchase. But if you are unsure about which games interest you, the unit does come with an eight game demo disk, which provides a sample of many major launch titles for the platform.

Sony Interactive Entertainment are also offering THE PLAYROOM VR for free as well, which has greatly expanded since its days as just a PlayStation Camera title. This title offers six games, which not only provide single-player opportunities, but the ability to play some of them socially with up to four friends equipped with DUALSHOCK 4 controllers. It is worthwhile checking out even if you already own a range of launch titles.

Unless you have been collecting external peripherals for the PlayStation 3 and PlayStation 4 over the years, the PlayStation VR doesn’t come with everything you need to use the unit out-of-the-box. The most notable omission is the PlayStation Camera, which was launched simultaneously with the PS4, but had very few games support it. You only require a single camera, which uses the nine light-up spots on the headset to identify where you are. The camera itself did a decent job of tracking my position– however I did find myself slowing having to reset my position (which thankfully just requires the OPTIONS button to be held down) every twenty to thirty minutes. Unlike other virtual reality platforms, you can only use one camera. While you aren’t going to be tempted to spend money on a second camera or experience even more clutter by your television, you are limited to a small tracking zone which is best suited to either sitting down or standing yet remaining stationary. 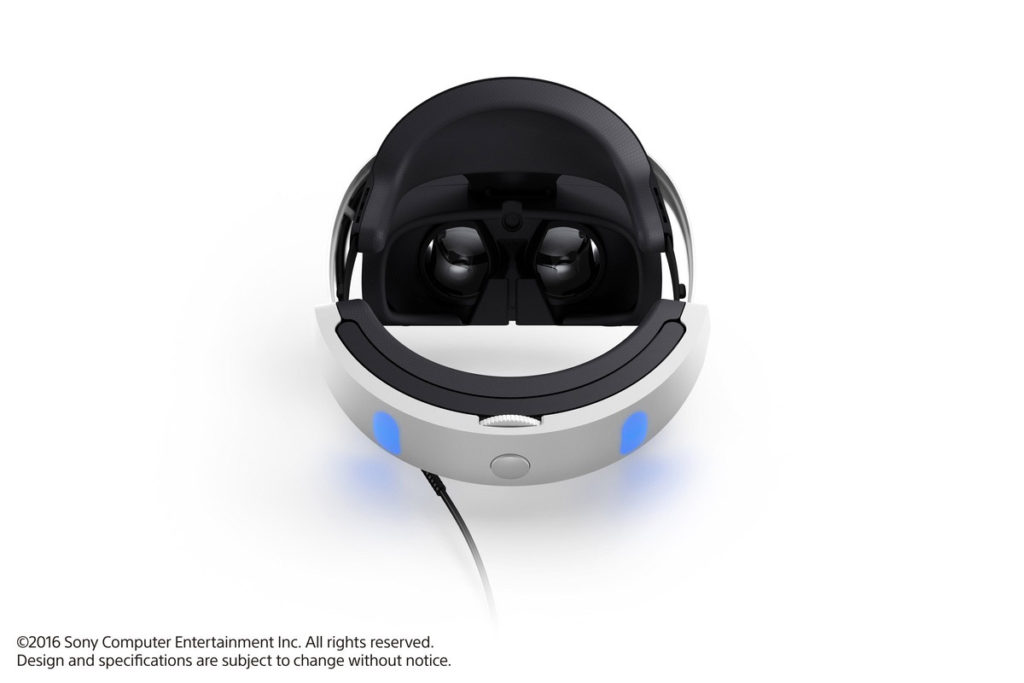 While not all games support them, and in most cases are optional, the PlayStation VR also supports the use of two PlayStation Move controller. These controllers do add more immersion to some titles when compared against the DUALSHOCK 4, but I found them to be more temperamental in terms of controls than the single controller. That being said, those who are fans of the current VR idol games or are playing something which is more immersive with a controller in each hand may find enough value to fork out for two controllers. If you don’t mind second hand accessories, it might be worthwhile trying to find the PS Move controlers pre-owned rather than paying full-price.

Several titles for the PlayStation VR allow social play with others. Thanks to the processor unit which you will have spent time setting up, you can either have what you see through the headset, or something completely different displayed on the television screen (the latter depending on individual game support). This means that people either watch what you play (whether you are aware of it or not), or alternatively, join in some local multiplayer fun.

The PlayStation VR also comes with a cinematic mode, which allows you to watch or play non-VR content while wearing the headset. It was a nice option, especially since someone else can practically use the television for another purpose while you are immersed in a game displayed on a virtual screen. However, like games specifically designed for the PlayStation VR, the quality present doesn’t compare against a UHD or 4K television in my opinion.

Final Thoughts on the PlayStation VR

With the PlayStation VR on stores for less than a month, it is hard to tell what the future has in store for this peripheral. It could very well be niche with limited titles developed for it, or something which first and third party developers embrace for years to come. Ultimately in terms of visual quality I do not think the PlayStation VR matches its more expensive competition, but does however shine when you consider its cheaper price point and titles currently in the works for it. While time will tell if we are still talking about the PlayStation VR five years from now – the experiences I have had with it so far have been memorable.