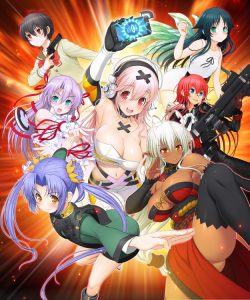 Earlier this year, XSEED Games published the 2D crossover fighting game Nitroplus Blasterz: Heroines Infinite Duel on the PlayStation 3 and PlayStation 4. Following a good seven to eight months of console exclusivity, the publisher have announced they are bringing the game over to the PC sometime this coming Winter (or Summer should you be in the Southern Hemisphere).

Nitroplus Blasterz: Heroines Infinite Duel is developed by EXAMU, the same game which brought us the Arcana Heart series. As its title may already indicate, this game brings together a range of characters from different Nitroplus video games – where players can have them fight one another with a bevvy of different skills.

Although not an exhaustive list of characters which are present in Nitroplus video games and visual novels, this game does see quite a few enter the fray. These include Super Sonico, Al Azif (Demonbane), Saya (Saya no Uta), Ein (Phantom: Phantom of Inferno).

This is what XSEED Games h ave to say about the gameplay mechanics of Nitroplus Blasterz:

With easy-to-execute combos, cinematic cut-ins on “Lethal Blaze” attacks that run the gamut from awe-inspiring to adorable, and assist mechanics that allow for up to six on-screen characters at a time, combat in Nitroplus Blasterz: Heroines Infinite Duel is guaranteed to stay fast and flashy. The game is populated by numerous heroines from the visual novel company Nitroplus’ rich collection of IPs, including playable characters Ein, Mora, Ruili, Al Azif, Saya, Ignis, Anna, Muramasa the 3rd, Kibanohara Ethica, Saber, and Ouka, as well as fan favorite mascot character Super Sonico. Players can also test how their skills stack up online against one another via network play with other gamers on Windows PC as they enjoy added features such as new victory animations for some fighters, animated stage backgrounds, and menu settings in training mode which are now saved from the player’s last play session.

After selecting a main character, players will duke it out while charging up the abilities of their two chosen partners, who – once called into the fight – will contribute with battle damage and various other effects. As the combatants exchange blows, their Power Gauges build at the bottom of the screen. Filling this gauge meter by meter, up to a maximum of three, allows players to gain access to devastating abilities, including character-specific super moves and a massively powerful “Lethal Blaze” attack that deals incredible damage but depletes all three meters.

For those who have not yet played this fighting game but are awaiting for its PC release, keep your eyes out for more news on its release date in the coming months.