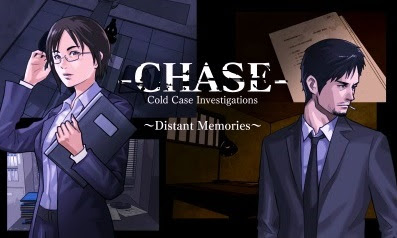 In collaboration with developer Arc System Works (Who they have served as publisher for, for many of their games over the years), Aksys Games will be bringing an English-localised version of Chase: Cold Case Investigation ~Distant Memories~ on the Nintendo eShop. Giving an idea of when we will be able to play the game, albeit at the start a fairly busy period for major releases, the company have confirmed this adventure mystery game will be available exclusively via the Nintendo eShop starting October 13 2016.

Chase: Cold Case Investigation ~Distant Memories~ is an adventure mystery game helmed by Taisuke Kanasaki – whose previous work includes Hotel Dusk: Room 215. This tale has players follow the journey of two gritty detectives, who use their sense of justice and instinct to seek out the truth.

As this is a mystery adventure game, you will need to put your own sleuthing skills to the test, as you solve cases by searching for clues, investigating crime scenes and interrogating potential suspects. According to Aksys Games, these are the three key features of Chase: Cold Case Investigation ~Distant Memories~:

Investigate– Find leads by diving head first into old investigation notes, crime scene photos and eye witness reports as you put together all the pieces.

Deep story–  5 years ago, an investigation into a mysterious explosion dead-ended without any resolution. Deemed an accident, the circumstances surrounding the case were never fully explained. Now, a new clue has reignited the case and shed new light on a startling revelation. Get pulled into a complex narrative of mystery and intrigue as the Cold Case Unit searches for the truth!