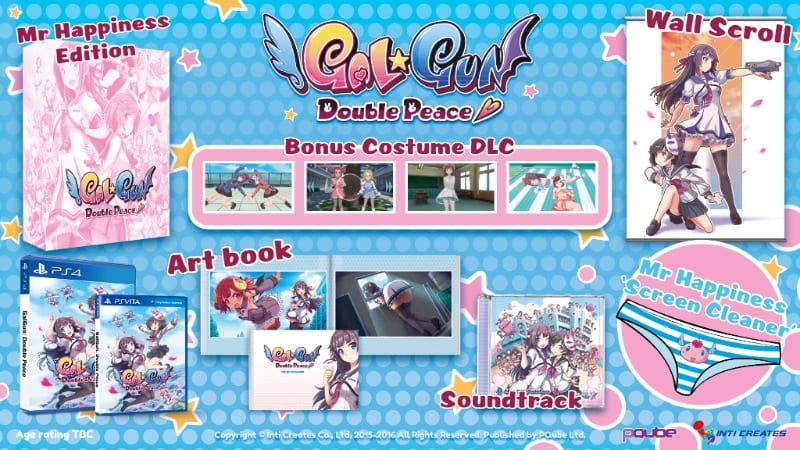 A few months ago and still coming as quite a surprise, PQube announced their plans to localise and release the rails shooter game Gal*Gun Double Peace in international markets later this year. While they have yet to share a closer look at how the localisation process has been going, the publisher do have something special to announce for those looking to nab themselves a pricier but exclusive physical edition set.

Exclusively available in Europe and North America, this “Mr Happiness Edition” is set to include the following goodies:

This special edition can now be pre-ordered for £64.99 (PS Vita) or £69.99 (PS4). Unfortunately for those who might like to shop around or have a favourite gaming store, this edition is only available through Rice Digital. Do note that there are different US/EU versions of the game, even if the contents of the set and game should be identical.

Developed by Inti Creates and published internationally by PQube, Gal*Gun Double Peace will be available for purchase later this year on the PlayStation 4 and PlayStation Vita. While Gal*Gun did originate on the Xbox 360 in Japan, it is currently not available on either the Xbox 360 or Xbox One.