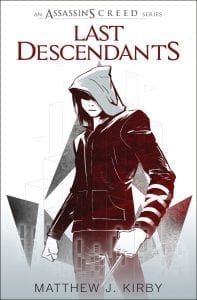 The Assassin’s Creed video game franchise is not a stranger to the wonderful world of literature, with several novels released over the years. Ubisoft and Scholastic have recently announced they will be collaborating to increase this number, with the confirmation of a new young adult book series known as “Last Descendants”.

These books will be written by Matthew J. Kirby, with the first book in the series to launch simultaneously in September 2016 within the United States, Canada, United Kingdom, Australia and New Zealand. Not to leave fans waiting too long, the second book is currently scheduled to launch in January 2017.

Last Descendants is an action adventure, historical fiction saga featuring a group of teens caught up in the centuries-old Assassin-Templar feud. Inspired by the video game series, the first book is set concurrently in the present-day, 1860s New York City, and during the Spanish conquest of the Aztec Empire. They have confirmed that historical figures including William “Boss” Tweed, Hernan Cortes and renowned opera singer Adelina Patti will be making an appearance. You can read the official plot synopsis at the bottom at the post.

Collaborating with Scholastic combines our shared passion for storytelling and using history as our playground to bring a new story to life. The Last Descendants book series represents a great opportunity to further develop the Assassin’s Creed universe in a way that appeals to both newcomers and existing fans.

Assassin’s Creed is an immersive world filled with rich and engrossing historical settings that teens will be drawn to again and again. Scholastic has a proven track record of bringing major franchises to the publishing world and we are excited to introduce these thrilling novels by author Matthew J.Kirby to readers everywhere.

Nothing in Owen’s life has been right since his father died in prison, accused of a crime Owen is certain he didn’t commit. Monroe, the IT guy at school, might finally bring Owen the means to clear his father’s name by letting him use an Animus — a device that lets users explore the genetic memories buried within their own DNA. The experience brings Owen more than he bargained for. During a simulation, Owen uncovers the existence of an ancient and powerful relic long considered legend — the Trident of Eden. Now two secret organizations will stop at nothing to take possession of this artifact — the Brotherhood of Assassins and the Templar Order. It soon becomes clear to Owen that the only way to save himself is to find the Trident first.

Under the guidance of Monroe, Owen and a group of other teenagers enter a simulation of memories they all share within their DNA: the 1863 draft riots in New York City. Owen and his companions will find themselves tested on the gritty streets of New York, and their experiences in the past will have far-reaching consequences in the present.