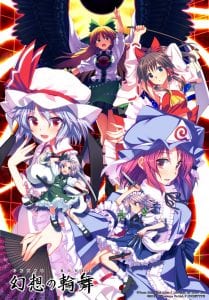 Granted it was not the only surprise to be announced at Nippon Ichi Software America’s recent press event, but confirmation of their plans to bring Touhou Genso Rondo was in my opinion the biggest one by far. NIS America have confirmed they are working with Japanese developer CUBETYPE to bring their competitive shoot ’em up game to both North American and PAL regions by the end of this year.

Touhou Genso Rondo was originally released in Japan for the PC, and was later ported over to the PlayStation 4 – complete with HD visuals, a complete user interface overhaul, upgraded single player mode, new characters/scenarios and more. With NIS America planned to only release the PlayStation 4 version, players are set to receive the definitive edition.

Players are able to select from 10 playable girls from the Touhou universe, and dive straight into bullet hell! Merging shoot ’em up gameplay with fighting gameplay mechanics, you must dodge incoming swarms of bullets flooding the screen while also taking down your opponent. As battles are 1 vs 1, the chaos might not be as frantic as it could have been otherwise. However, this also means you must stay on your toes, as there will be no backup to pick up your slack.

Like most fighting games nowadays, you can either opt to experience the game through the eyes of your favourite character in “Story Mode” or take advantage of the standalone offline and online gameplay modes.