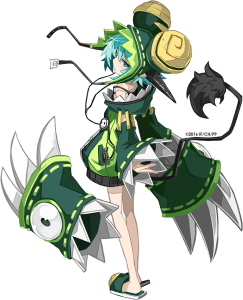 With their release of Trillion 1,000,000,000,000: God of Destruction a little more than a month away from its March 29 release date, Idea Factory International have shared some information and screenshots featuring Fegor, the Overlord of Sloth and a key character in this game.

Fegor is Zeabolos’ (the main character’s) older sister. Beneath her lazy exterior, she’s actually a powerful fighter who was instrumental in making her brother the king of the Underworld. She uses her trusty weapons Righty and Lefty – the toothed sleeves at the end of her sweaters – to claw her enemies into submission. Should she be able to get out of bed, Fegor might prove instrumental in taking the demon god of death’s 1 million HP gauge down to zero.

There is not long now until you will discover for yourself if Zeabolos and the six overlord candidates will be able to take down the god of death before the underworld is consumed. Trillion 1,000,000,000,000: God of Destruction is set for release on the PlayStation Vita starting March 29th in North America and April 1st in PAL regions.

More than a thousand years passed since the legendary battle against the Heavens. The demons of the Underworld lived an evil, yet fulfilling life in peace. And so it remained, until the appearance of Trillion, a demon god of destruction that sought to consume the world.

Its power unfathomable, it destroyed the Underworld’s forces. Even Zeabolos, the Great Overlord himself, was defeated. On the brink of death, Zeabolos heard a mysterious voice from deep within. “It is too early yet for the lineage of the Great Overlord to fall…” Zeabolos was revived, his shambled body patched together again by a young necromancer named Faust.

Zeabolos gained the power of the Soul Grimoire, and decided henceforth to fight.