Pokemon’s 20th Anniversary is Shaping Up to Be Huge – #Pokemon20

It is hard to believe that it has been almost twenty years since the world were introduced to 151 distinct monsters which could be caught in a ball – the number of which have greatly increased over the years. The Pokemon Company International have announced they will be holding a number of promotions during this year, which will cover the wide range of media formats that the Pokemon franchise has covered. How will they be celebrating a franchise which has seen 275 million video games sold, 21.5 billion TCG cards shipped out to 74 countries, an 18-season TV anime and much more? Read on to find out.

While this is not new news, The Pokemon Company will be releasing Pokemon Red Version, Pokemon Blue Version and Pokemon Yellow Version as digital downloads on the Nintendo eShop starting late February. Although these games were later ported over to the Gameboy Advance with a wealth of new features, this will provide an opportunity for fans to dive into the original games as they were originally meant to be played. 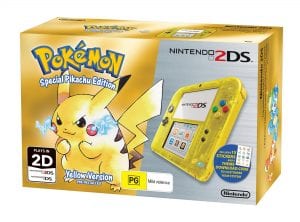 Although this might vary between regions, special bundles will be released, each of which contains a pre-installed version of a classic Pokemon game and a console themed after that specific game. In North America, special Red and Blue bundles of the New Nintendo 3DS will be available, each of which will come with a unique cover plate and an exclusive Pokemon HOME Menu Theme. This is different in Australia, where Nintendo Australia will be offering special Nintendo 2DS bundles for Red, Blue and Yellow versions. The 2DS Special Edition bundles (SRP $149.95) will feature packaging reminiscent of the original Game Boy games, a sheet of 15 stickers that can be used to customise the system and the HOME Menu Theme.

There will also be monthly Pokemon distributions starting in February, some of which will be through retail stores which might disappoint some. To take advantage of these, players will need to own one of the following: Pokemon X, Pokemon Y, Pokemon Omega Ruby and Pokemon Alpha Sapphire.

While it is unknown if a new Pokemon instalment will be announced in 2016, fans to have the Wii U exclusive 3D fighting game Pokken Tournament to look forward to.

While the first three Pokemon movies have been available on DVD and Blu-ray in Australia since last year, some of the earlier movies in particular might not have been that easy to pick up in other countries. Beginning this month and continuing through the year, 12 Pokemon feature films will be available for digital download through iTunes, Google Play and Amazon. This will include digitally remastered versions of Pokémon: The First Movie and Pokémon the Movie 2000 and Pokémon 3: The Movie. In addition, Pokémon TV, available on Pokemon.com, Roku, Chromecast, and Amazon Fire platforms, will feature one film title per month to align with other Pokémon brand activities. The first three Pokémon films will also be available in both DVD and Blu-ray formatted bundles from licensee Viz Media. 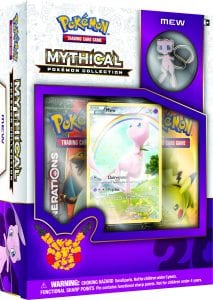 Pokemon TCG fans can celebrate 20 years with the Pokemon TCG: Generations expansion. This special expansion covers every stage of a Trainer’s journey, from the choice of a first partner Pokémon to the most elite of Trainer battles. Featuring Pikachu, Snorlax, Ninetales-EX, Jolteon-EX, plus Mega Charizard-EX, Mega Blastoise-EX, and Mega Venusaur-EX, the Generations expansion will be available in February. Generations booster packs will be available within specially labeled and designed Pokémon TCG products released as part of the Pokémon 20th celebration, starting with the first Pokémon TCG: Mythical Pokémon Collection coming in late February.

For those who collect Pokemon merchandise, you can celebrate 20 years of Pokemon in style with new apparel, accessories and souvenirs through the Pokemon Center website.