Ubisoft and Disney Collaboration Project ‘Gravity Falls: Legend of the Gnome Gemulets’ to Launch This Month 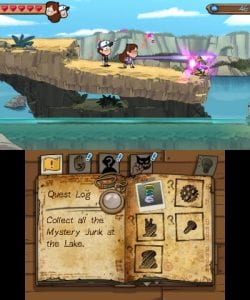 Back in July, a new collaborative project between Ubisoft and Disney Interactive was announced, which would see the first video game developed for the Disney XD animated series Gravity Falls. These two companies have today announced that this title, Gravity Falls: Legend of the Gnome Gemulets, will be available on store shelves exclusively on the Nintendo 3DS beginning October 22nd 2015.

Created in collaboration with show creator Alex Hirsch, this is a brand new adventure which has players take control of both Mabel and Dipper Pines as they help Jeff the Gnome retrieve the ancient Gnome Gemulets and restore magic to the Gnome Forest. The game features dual-character gameplay, with both Mabel and Dipper having their own unique powers granted to them through gnome magic. Dipper is bestowed with Gnome Battle Cuffs, which delivers powerful punches at close range. Mabel on the other hand wields the Fleece of Bedazzlement, that lets her whip her sweater sleeves to attack monsters from afar.

Interestingly, Gravity Falls: Legend of the Gnome Gemulets is powered by the UbiArt Framework game engine, which has previously been used to develop Rayman Origins, Rayman Legends and Child of Light.