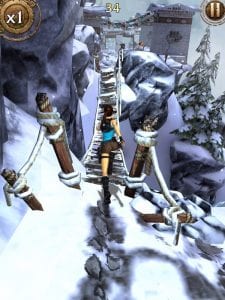 Square Enix have this evening announced their free-to-play smartphone app/game Lara Croft: Relic Run has been downloaded more than ten million times across all mobile devices since launching on May 28 2015.

To mark this milestone, Square Enix have released a new update, which allows players to explore a new Mountain Pass location. With this new locale, Lara Croft can now jump on a snowmobile and take on yetis and ice-spiders. She also has access to a new mini-gun to help protect herself from the “New Demon”, a new boss that shoots ice into Lara’s path, creating difficult obstacles that need to be avoided.

This update also includes an improved tutorial and a new campaign map/mode which allows players to work through levels to complete objectives and collect relics to unlock a new location.