Idea Factory International to Release Trillion: God of Destruction in 2016 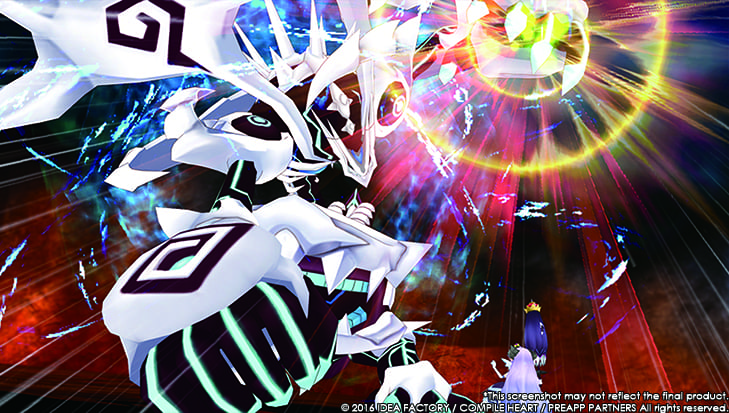 As the title already hints at, this game will see you working towards taking down a final boss with 1 trillion (1,000,000,000,000 HP). Its up to you as protagonist Zeabolos to strategically battle against this god, alongside six Overlord candidates through rigorous training, forging strong bonds and potentially making painful sacrifices. Should you fail… the underworld risks being consumed.

Trillion: God of Destruction is set to be released in North America and PAL regions with both a digital and physical release. While the release date is currently only set as ‘Spring 2016’, it has been confirmed that the game will include both the original Japanese and a newly commissioned English dub.

Expect to hear more about this title in the coming months. For a sneak peek at some of the battle system, user interface and event cutscenes, check out the small compilation of (Japanese) screenshots below:

More than a thousand years passed since the legendary battle against theHeavens. The demons of the Underworld lived an evil, yet fulfilling life in peace. And so it remained, until the appearance of Trillion, a demon god of destruction that sought to consume the world.
Its power unfathomable, it destroyed the Underworld’s forces. Even Zeabolos, the Great Overlord himself, was defeated.
On the brink of death, Zeabolos heard a mysterious voice from deep within. “It is too early yet for the lineage of the Great Overlord to fall…” Zeabolos was revived, his shambled body patched together again by a young necromancer named Faust.
Zeabolos gained the power of the Soul Grimoire, and decided henceforth to fight.
Facebook
Twitter
ReddIt
WhatsApp
Pinterest
Telegram
Previous articleShadows of Evil from Call of Duty: Black Ops III Extends into Real Life With New ‘Escape Room’ Experience
Next articleExtra Flair to be Available For PlayStation 4 Consoles Starting November 19 With Official Custom Faceplates