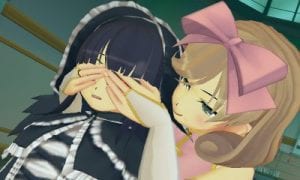 Bringing another Senran Kagura video game to the western market, XSEED Games have announced that their busty beat-’em-up Senran Kagura 2: Deep Crimson is now available for purchase exclusively on the Nintendo 3DS. While prices and distribution channels may differ between regions, in North America the game will be available via both a digital Nintendo eShop Release ($39.99 USD) and a limited “Double D Edition” retail release ($49.99) which includes two music discs (Containing 60 tracks).

Senran Kagura 2: Deep Crimson follows the events of Senran Kagura Burst, sending all 12 of the original cast members on another supernatural martial arts adventure through modern Japan. For the first time in the series, shinobi can fight in pairs, covering each other’s backs and combining special techniques as needed, or fight alone to give their partners time to recover after bouts of intense combat. One player can control both team members, switching back and forth at will, or two players can fight side by side in local or online co-op mode.

Developed by Marvelous Inc. and Tamsoft, Senran Kagura 2: Deep Crimson is now available for purchase in North America. Marvelous Europe is handling the game in PAL regions, with the main distribution channel set to be the Nintendo eShop. However, they are offering a number of physical packages, which are listed and purchasable via the Senran Kagura 2: Deep Crimson website.