New Gameplay Trailer Released for Dragon Quest Heroes: The World Tree’s Woe and the Blight Below

With only a few weeks until the game’s October 13 launch, Square Enix have shared a new gameplay trailer for Dragon Quest Heroes: The World Tree’s Woe and the Blight Below, which is set for release exclusively on the PlayStation 4. This video can be found at the top of this post.

Dubbed “The King Doric’s Royal Overview Trailer”, this video is narrated by the king himself, and sets out to provide viewers with character strategies, in-game shopping tips and alchemic knowledge, which might be useful helping them and the playable characters triumph over the hordes of monsters driven mad by a mysterious curse. 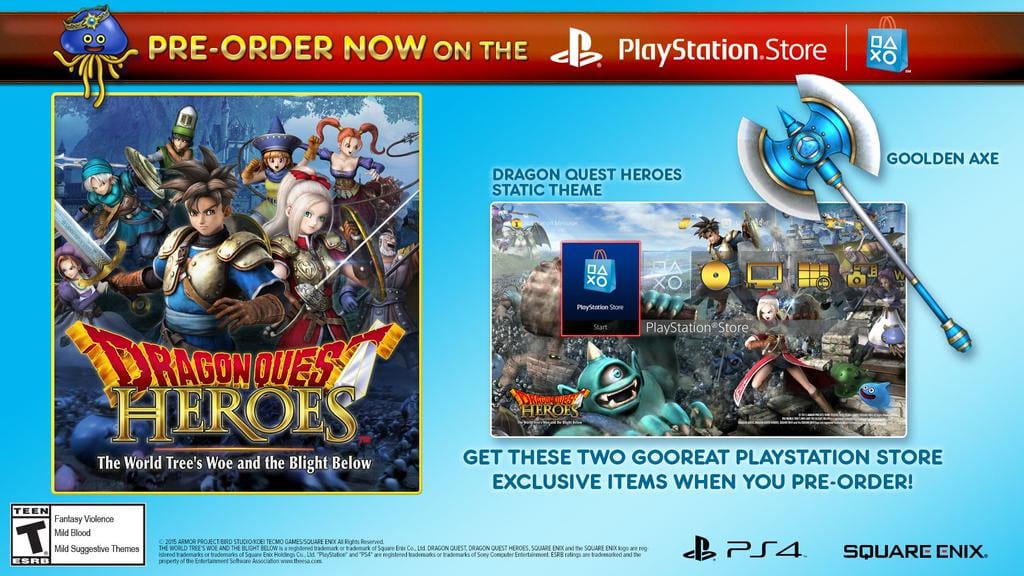 While Dragon Quest Heroes: The World Tree’s Woe and the Blight Below already comes with all extra downloadable content previously released in the Japanese version on-disc at no extra charge, Square Enix have also announced that those who pre-order the game through the PlayStation Store will also receive a static wallpaper theme for the PS4 and the special in-game weapon for Yangus – The Goolden Axe. At the moment this announcement was for the North American store, and may not be offered in other regions.

Developed by Omega Force (Who has also worked on various hack-and-slash action RPG’s including the Dynasty Warriors/Samurai Warriors franchises) and published by Square Enix, Dragon Quest Heroes: The World Tree’s Woe and the Blight Below is set for release next month, exclusively on the PlayStation 4. While there is a PlayStation 3 release in Japan, it doesn’t seem like this will be offered in international markets.

Official Story Synopsis
A dark cloud has fallen over the city of Arba, driving the once peaceful monsters into a frenzied rage. As either the hero, Luceus, or the heroine, Aurora, the player joins forces with an iconic cast from previous DRAGON QUEST titles to bring the rampaging hordes of monsters to their senses and restore order to the kingdom.

Star Citizen Alpha 3.14 Now Available to All Backers on PTU