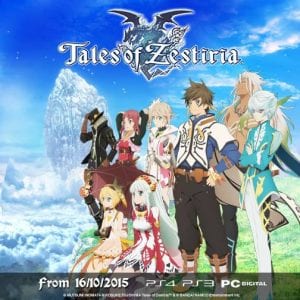 In a surprise announcement, Bandai Namco have today announced that they will not only be releasing Tales of Zestiria on the PlayStation 3 as was originally the case in Japan, but also on the PlayStation 4 (Presumably Retail/Digital) and PC (Digital) platforms. The release date for all three editions will be almost simultaneous.

To complement this announcement, Bandai Namco have also confirmed that Tales of Zestiria will be available outside of Japan starting October 16 2015 on PlayStation 3 and PlayStation 4 consoles. While it is unclear why the extra few days are needed, a PC release is set to closely follow on October 20 2015.

As the countdown for Tales of Zestiria’s release begins, check out the game’s new English “Change the World” trailer below:

*Please Note that this article uses updates from Bandai Namco Entertainment Europe, and may be slightly different in American markets.

While stocks of PlayStation 5 are still limited worldwide, those who are fortunate enough to have the new generation console in their home can...
Read more
Video Games

Find yourself logging in to Final Fantasy XIV last night to check out content in the new Patch 5.5, but unable to return to...
Read more
Video Games

In recent Final Fantasy XIV expansions, Square Enix has been strong in delivering not only challenging post-game content for players to work through, but also nostalgic...
Read more