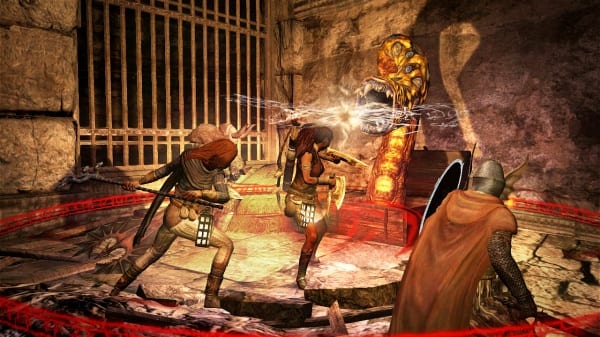 While the issue of Famitsu will not be out until Friday and I personally remain skeptical about this information until formally unveiled through the magazine’s official distribution or Capcom themselves, it seems like information about Dragon’s Dogma Online has begun trickling in. This information has been translated/compiled by the folks at Neogaf.

Dragon’s Dogma Online is set to be free-to-play and supported by microtransactions. Unlike the previous Dragon’s Dogma which was available on both PlayStation 3 and Xbox 360 platforms, Capcom seem to have adopted a trio of consoles: PlayStation 3, PlayStation 4 and PC. Unless an announcement is made at a later date, it seems like support for Microsoft’s Xbox platform has been dropped.

Minae Matsukawa has been listed as producer, Kento Kinoshita as Director and Hiroyuki Kobayashi as Executive Producer (Reprising his role from the original Dragon’s Dogma).

The game will take place in a new open world known as Lestaria rather than Gransys. This world is set to become even bigger through seasonal updates, which will come with new areas to explore, new enemies to fight and much more. Adventures in this new world will once again involve four player parties, with towns serving as lobbies where you can meet up with up to 100 people and take advantage of quick matching. It doesn’t seem like players will be forced to play with parties either, with it being possible to take advantage of the original Pawn system.

The gameplay of Dragon’s Dogma doesn’t seem to have changed too much, with the game still set to be an action-RPG. There will once again be giant monsters that players will be able to climb and deal damage against, and a range of different classes to add some diversity to each character (Some suggested classes are fighter, hunter, priest and shield sage). Added diversity will also come through an extensive character creation system.

Facebook
Twitter
ReddIt
WhatsApp
Pinterest
Telegram
Previous article
Dragon’s Dogma Online to be Featured in This Week’s Issue of Famitsu
Next article
VIZ Media to Release The Legend of Zelda: A Link to the Past Graphic Novel After Two Decades