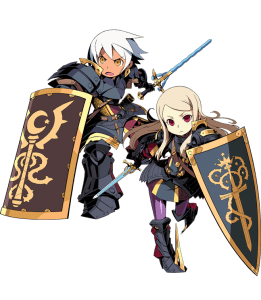 A week ago, ATLUS USA showcased the Landsknecht class in Etrian Mystery Dungeon. This class would be considered the traditional fighting class – with the ability to perform devastating attacks against individual foes and perform a respectable amount of damage to multiple enemies with AOE attacks. Although they have have satisfactory ability to survive on the battlefield, they are not really able to protect an entire party for more than a moderate amount of time. This is where the Protector class comes in.

ATLUS USA have posed a particular scenario to showcase where Protectors would come in handy: You’ve just successfully cleared a floor in a dungeon, found an awesome weapon in a treasure chest, got tons of gold and crafting drops from monsters and are mere steps away from the exit when a group of enemies respawn and tear your party to shreds; the hard-earned gold, experience, and loot lost forever to the sands of time

Protectors would be valuable in this scenario with a high defense stats complemented by their tower shield, which can create an almost immovable object of damage-soaking toughness. Like earlier instalments in the Etrian Odyssey franchise, they also come with a range of taunts that will lead foes to them and come with different ability binds associated with them. The goal of adding one to your party is that they take the damage while other members slowly destroy the foes.

Earlier this month, ATLUS USA confirmed that they will be bringing Etrian Mystery Dungeon exclusively to the Nintendo 3DS from April 7th 2015. Unfortunately, no PAL region release date has currently been locked in.